A man in China was photographed by a netizen while he was out walking with a child assumed to be his son. In the photo, the man was soaked under the downpour while the child remained mostly dry – because daddy was holding out the umbrella so his son would not get wet!

This poignant photo touched many hearts across the world as it simply shows us the huge love a father has for his son. It was clear proof that a dad would do anything for his child, even if it means getting soaked in the rain just so the child stays dry.

Of course, they could have brought two umbrellas so both of them could stay dry –or dad could have picked up the child so they can share the umbrella – yet he certainly had reasons why he did not do so. Who are we to question those reasons when he did not let his child get wet, anyway? That is certainly the most important aspect of the photo. There’s no need to blame the dad for anything.

His actions clearly showed just how much he loved his son that he was willing to get soaked in the rain (and get his leather briefcase wet, too) as long as the young boy stays dry.

This touching shot was uploaded to imgur by an Anonymous user who captioned it with, “What is Love? Hope the son just grows up to realize how lucky he is… Pay it forward” 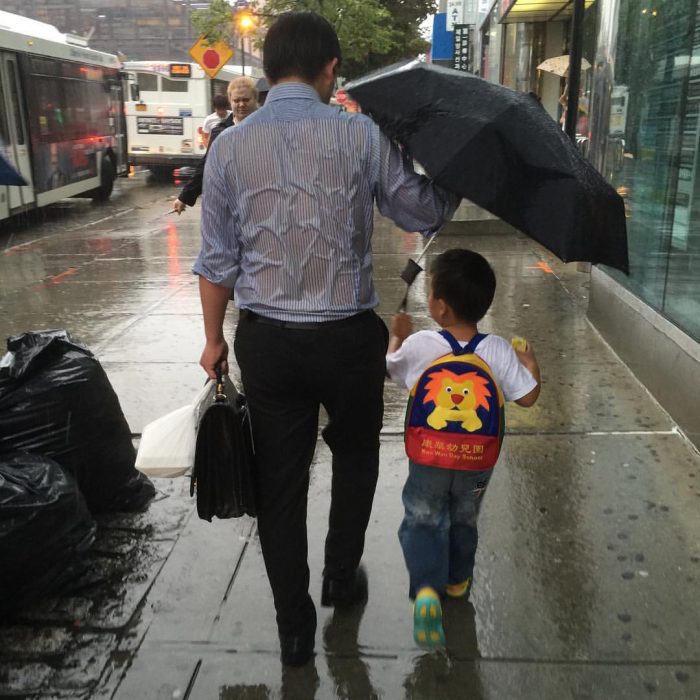 Dads Sacrificing for Their Kids

We have heard a lot of stories about dads sacrificing for their kids, be it by working a second job to meet the family’s needs or giving up a body part (usually a kidney) so his sick child could live.

It is also possible that a dad will sacrifice himself or his happiness just to make his kids happy. Such is best exemplified by the video, entitled “My Daddy is a Liar”. It is another sappy Thai ad that’s bound to make you cry yet it definitely shows just how much dads are willing to sacrifice for their kids.