Home
Lifestyle
Did Girl Just Make Up Story about Student Who Allegedly Stole P45k from His Parents?

Two days ago, web servers were abuzz with news of a young maritime student who bragged to his friend about stealing P45,000 from his parents who were both overseas Filipino workers (OFWs).

Who wouldn’t be angry at this young man, anyway? After all, he took more than half of his tuition money just to give his girlfriend a good time!

Read the original story here: Student Allegedly Brags About Stealing P45k from OFW Parents to Have a Good Time with GF

Clever netizens who read the viral stories circulating on the web were able to find the student’s Facebook account and plastered his name, Johnleo Bulactin Camposon, on social media but a girl named Irish March Bulactin Bernales defended him from bashers. Irish identified herself as the guy’s cousin, calling him “John John”.

Irish said that John John was merely a victim of cyber bullying and that nothing about Eya’s post was true, especially because his parents are not OFWs! 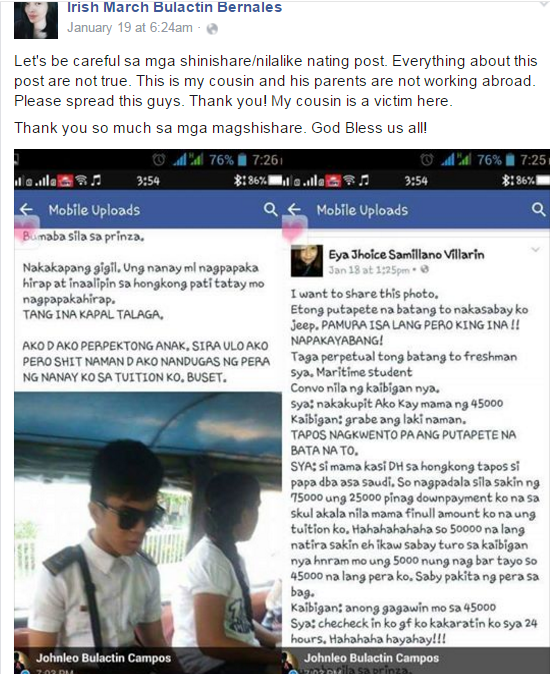 If Irish’s claim is true, then netizen Eya is the one who should be blamed for the ruckus. Her supposedly made-up story had the huge potential of destroying this young man’s life and reputation, even if there was no grain of truth in it.

On the other hand, it is also possible that the post by Irish who claims to be his cousin is not also true; though her short statement is also believable, of course.

Still, one thing is for sure, one innocent life could have been destroyed by a single post created by someone with an overactive imagination.

What do you think of this?