One netizen shared a shocking experience she had while riding a public utility jeep. According to Eya Villarin, the student appears to be a freshman Maritime student at a school named Perpetual (possibly University of Perpetual Help?).

This student bragged that he was able to steal P45,000 ($945) from his parents who are both overseas Filipino workers (OFWs). Villarin claimed that she heard the student saying that his mother (who works as domestic helper in Hong Kong) and his father (who is in Saudi Arabia) sent him a total of P75,000 ($1,574) for his full tuition fees but he only paid the school P25,000 ($526).

The friend he was talking to allegedly borrowed P5,000 ($105) from him; thus, he still has P45,000 ($945) with him. This braggart even, allegedly, showed the money to his friend. Asked what he would do with the money, the student laughed hard and wickedly told his friend that he would use it to check in at some hotel with his girlfriend, Villarin further alleged. 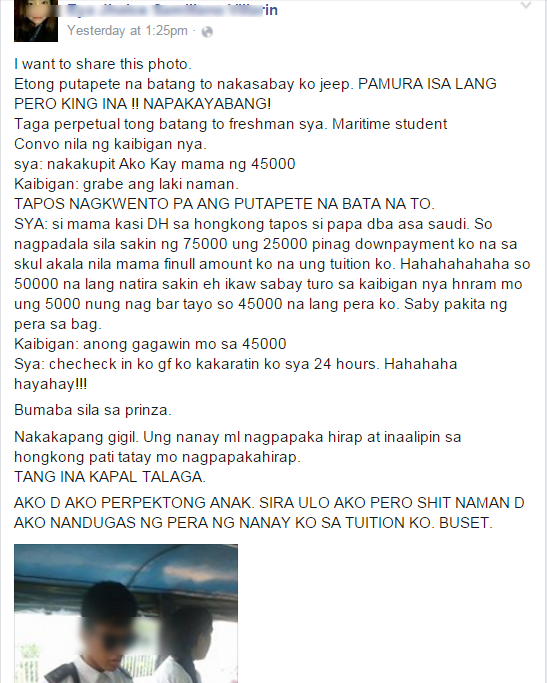 Screenshot of Villarin’s post before it was taken down

Villarin chose to keep her cool despite feeling really angry with the student but later posted his photo and the story on Facebook out of anger. The angry post has gone viral, earning 1.9k “likes” with mostly angry reactions from netizens. After all, no one is surely going to be amused with someone who steals his parents’ hard-earned money meant for tuition fees just so he could spend time with his girlfriend and have a good time!

READ UPDATE: Did Girl Just Make Up Story about Student Who Allegedly Stole P45k from His Parents?