We all know how expensive excess baggage charges can be on airplanes! But one woman found a useful travel hack when she wore 4kg of her clothes to avoid paying the extra charges.

Traveling for a holiday in a Thomas Cook flight from Manchester, UK, to Fuerteventura in the Canary Islands, 30-year-old Natalie Wynn found herself with a huge bill to pay. The luggage she was carrying had a total weight of 9.4kg, way more than the regular limit of 6 kilogram per passenger.

She was asked to pay £65 ($84.50) for the excess weight or leave some of her things to go down to the 6-kg limit. Because she only had just £60 ($78) in her account and she had planned on using that money for food and other essentials during her trip, she was certainly not willing pay for the excess charges.

Refusing to leave anything behind but also rather unwilling to part with her money to pay for the excess baggage charge, Natalie decided to do something that many travelers would probably not do. The wise young woman put on several of her clothes – something that she admitted to have seen on F.R.I.E.N.D.S episode “The One Where No One’s Ready”. 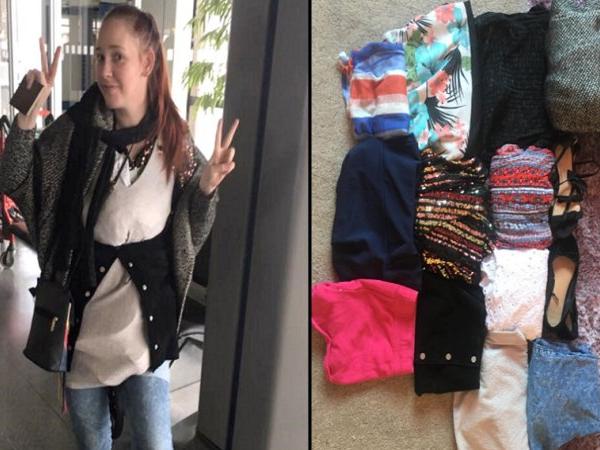 “I was boiling, absolutely boiling. I still had plenty in my case but I put near enough half of what I’ve put on,” Natalie admitted.

Seeing that the young lady was really determined to be on that flight without paying the excess charges on her luggage, some of her fellow passengers admired her grit and offered to share their baggage allowance so she could save her money.

Lucky for Natalie the ground crew actually took everything in stride and had a good laugh over her plan. A steward even told her she could take off the extra clothes once she gets on the plane. Whew! Let’s just hope she will also be allowed to do so on her flight back home…