Many stores go by the policy, “The customer is always right.” But many disagree with this adage, especially because there are rude customers who think they have the right to degrade the service crew or store assistants just because they are ‘lowly’ workers there.

In a video that has recently gone viral on social media, an alleged SM Development Corporation (SMDC) employee got rather violent at what appears to be a convenience store.

The post did not mention where and when this incident happened but it was clear from the clip that this guy, whoever he was, was quite angry over something. 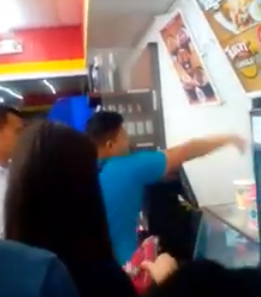 It was later revealed that the employee behind the counter had asked this guy to line up properly as there were other customers ahead of him but he got angry. He continued his rant and didn’t want to give his spot on the queue, telling the employee that he had no right to tell him what he should do.

But as the store associate behind the counter continued to calmly talk to the angry customer, the latter’s anger grew even more. In his anger, he throws a pack of bread to the person behind the counter, much to the other customers’ surprise! 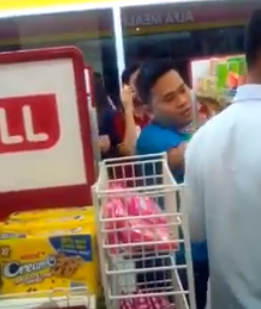 Perhaps also bursting with anger at the customer’s actions, the service crew hits him back with what appears to be a pack of milk shake! LOL.

Realizing that he had met his match, the angry customer took a step back but continued to rant and even tried to get the guard to his side but everyone who witnessed the confrontation knew it was instant karma for him.

This is a store that offers common items like food, toiletries, and various stuff. While convenience stores are notorious for having higher prices for commodities, they are popular because of the convenience they offer customers and the long hours they are open – most are actually open 24 hours a day!