Home
News
News & Culture
VIDEO: Man Breaches Security in Spanish Airport to Chase after His Plane Getting Ready for Take Off

A Bolivian national was late for boarding and his plane was already taxiing on the runway at Madrid-Barajas Airport in Spain, getting ready to take off for the Canary Islands but the still unidentified male passenger probably had something really important to attend to at his destination or he probably didn’t want to pay for the hefty rebooking fees; thus, he breached security and managed to get to the runway where he actually chased after his plane!

According to reports, the passenger was able to reach the runway by passing through the exit doors and triggering the alarms and jumping from the jet bridge which was a few feet off the ground and didn’t have stairs.

When he finally managed to reach the ground while also holding on to his two carry-on bags, he tried to get the attention of the driver of one of the baggage-carrying vehicle who ignored him. Seeing that he can’t ask help from this guy, he began running towards the departing plane as fast as he could. 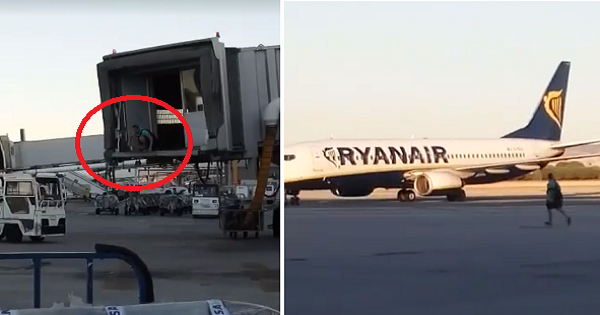 Someone in the plane must have noticed him because he reportedly got on that flight!

The incident was caught on camera by an airport employee and the resulting video was shared on Facebook by CC.OO Ryanair and Lesma Handling Facebook page.

“This is how passengers in Madrid behave when they don’t arrive in time for their flights. This particular passenger was missing a Ryanair’s flight and, unbelievably, skipped several security protocols established by Aeropuertos Españoles y Navegación Aérea (AENA) in their airports,” the post translates. “We’re talking about level 4 security protocols.”

Here’s the video of the incident:

Although the Bolivian passenger was able to get on that plane, he was subsequently arrested upon arrival at the airport in the Canary Islands and made to pay a hefty fee for breaching airport security.

…He probably should have rebooked his flight! It would have cost him less…

What is a Jet Bridge?

A jet bridge is the mechanically controlled moving walkway that connects passengers from the terminal directly to the airplane.