Anna Bozman Thompson had long been planning to get married with her long-time partner but before the big day arrived, her son Lake passed away after battling leukemia for years. Lake would have turned nine years old last May 2015 but he died weeks earlier.

Heartbroken and grieving over her son but also knowing that life must go on for her and the rest of the family, Anna decided to proceed with the marriage. She believes that Lake has become the family’s angel, watching over them at all times; thus, she feels that he would be there on her wedding day.

Moreover, she wanted to include him in the family photo on her wedding day as he was, after all, a huge part of the family. Anna enlisted the help of photographer Brandy Angel to create the tribute photo where Lake appeared as a “ghost” image. 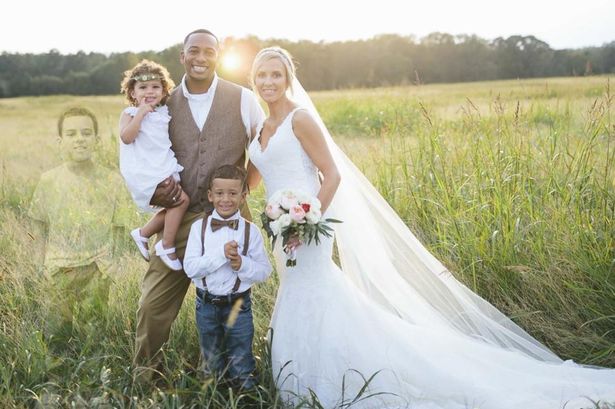 She posted the photo with the caption “Prayers for Lake Bozman” and it quickly went viral, with thousands of netizens touched by this mother’s plight. Truly, it is difficult to lose a loved one, especially if this person is your own child.

Somehow I have managed to continue going but there have been many days that I did not think I could. I have honestly been making it minute to minute as grief is a huge roller coaster. He made sure that it would be a day that none of us would forget.

Although I felt his presence that day and I was actually happy, it was almost unbearable to take family pictures without him. I needed this picture more than [the photographer] or anyone could ever know. THIS is my family.

For centuries, people believed in the existence of ghosts. It is believed that these ghosts are the spirits of the people who stayed on Earth for some reason, perhaps due to a mission they still had to fulfill or because they died before their time.

While most ghosts are good and do not harm people, there are stories of some tormenting the living; though those who do not believe in ghosts think these stories are simply made up by people with overactive imaginations.