This is plainly heartwarming. The picture below captures a tender moment where a soldier selflessly shared his meal with three street kids. According to Inquirer, the scene was taken right outside the Jollibee fastfood branch in Isabela, Basilan in the Philippines.

Karlo Marlon Ignacio of dxNO was at the rooftop of their radio station when he noticed what was happening below. So he snapped a quick photo of it. When he was interviewed about it, he said:

“I just want to share something inspiring that day. I was touched by the soldier’s deed. We hardly see similar images these days.” 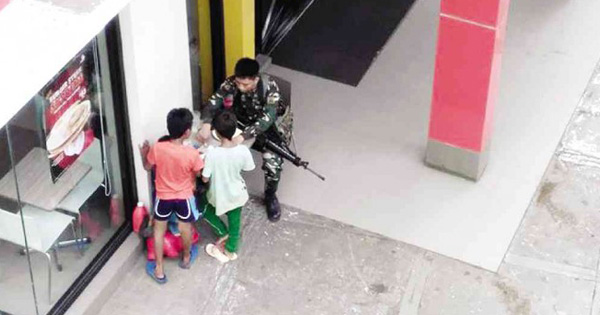 Eventually, the soldier was identified as Cpl. Ryan Santos of the 8th Field Artillery Battalion. Join Task Force Basilan commander Col. Rolando Bautista said about him “He was temporarily detailed at Jollibee that time for preemptive measures as the said food chain received threats.”

Santos, on the other hand, said he wasn’t aware the photograph was taken and that it eventually went viral online. He later confessed,

“When I opened the pack, the three children approached me. It’s so difficult for me to eat the meal while these children stared at me. They never begged or asked, they just stared at my food. I told them we will have equal shares so everyone can eat.”

Growing up poor himself, Santos added “I know the feeling of being poor and hungry. Back at home, even if we have little food on the table, my parents divided it equally, we eat it together.”

Street Children Statistics In The Philippines

In the Philippines, there is a large number of street children with estimated figures of 22,728 in Luzon, 40,860 in Visayas, and 138,328 in Mindanao. About 70% of the street children are boys and they mostly rely on begging for their daily food.

Aside from sharing food with them, we can also donate to charitable organizations to help feed these hungry kids.