Home
News
News & Culture
This Loyal Supporter Campaigns for Duterte from the Hospital!

Despite being confined in the Neuro Critical Care Unit (NCCU) at St. Luke’s Medical Center in the Philippines, a loyal of Mayor Rodrigo Duterte is actively campaigning for him, in hopes that the tough-talking mayor would win in the presidential elections this coming May 2016.

In a post shared by another Duterte supporter, Charito Ching Plaza, on Facebook, it was revealed that the family of Manong Nando from Butuan City in Mindanao, southern Philippines wanted her and Duterte to know that the old man is campaigning for the mayor even if he is confined in the hospital.

Transferred from Butuan Doctors to St. Luke’s Medical Center because of his condition, Manong Nando never wavered in his hope that Duterte would win the presidency but he also knows that not everyone is voting for the Davao City mayor. So, even on his sick bed, Manong Nando campaigns for the mayor to everyone who enters his room – whether a doctor, nurse, medtech, janitor, or any visitor for that matter.

He couldn’t wear his ‘Team Duterte’ t-shirt but he asked his children to take a photo of him ‘wearing’ the shirt so they could share it on Facebook. This shirt now hangs beside his hospital bed. 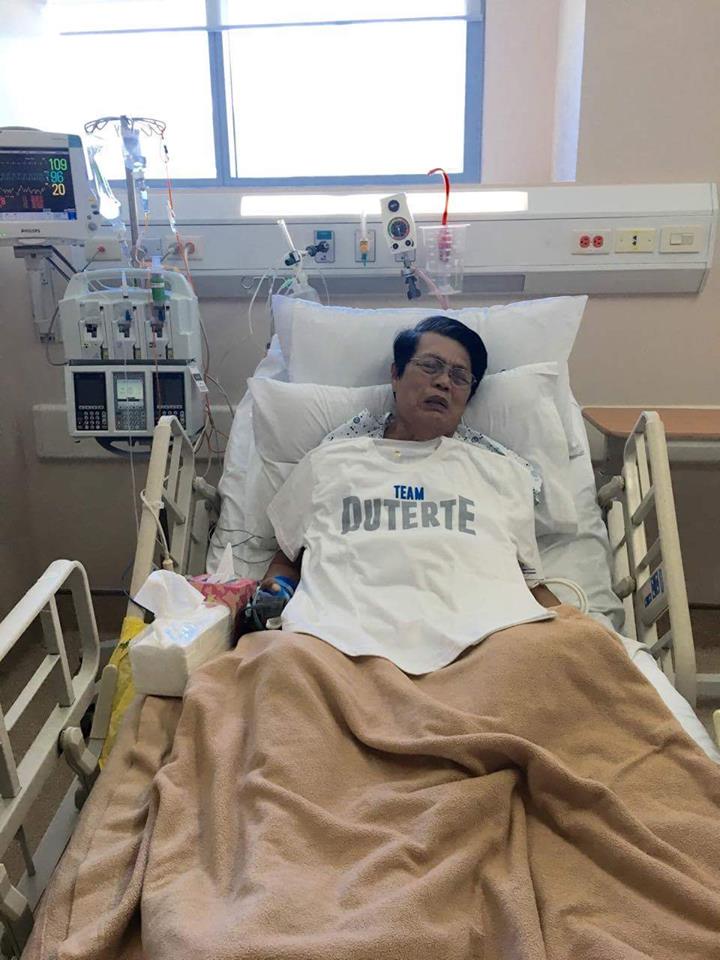 Manong Nando cried while the picture was being taken. When asked why, the old man said that he was just feeling emotional because he feels sorry for many people so he hopes that Duterte would win.

After Plaza shared the story via her Facebook account, the photo was flooded with comments from well-wishers who are hoping that Manong Nando would get well soon so he could also vote for his idol and, hopefully, celebrate at home if Duterte wins the elections.

The Duterte camp has not issued a statement regarding Manong Nando’s loyalty and quite possibly, in their busy schedules, never will yet it was surely enough for this loyal supporter that his story has inspired many of his fellow Duterte supporters…