Eerie photos taken at Mount Kinabalu shortly after a 5.9 magnitude earthquake that shook Sabah has gone viral on social media.

The two photos feature members of the Persatuan Komuniti Bugis Sabah (PKBS) and pair of dark disembodied that mysteriously appeared with them.

According to PKBS vice president Samasuddin Yusop, the photos captured at the base of Mount Kinabalu were not altered.

The spooky photos were taken on Tuesday after the PKBS group gave their donations to the Mount Kinabalu earthquake fund, Ranau police officers, and mountain guide.

For Samasuddin, the creepy images convey an important message. 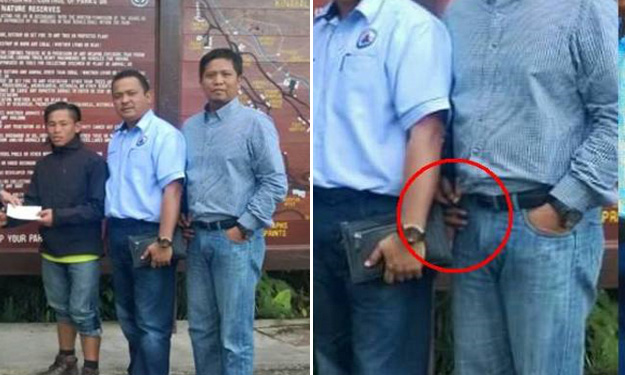 “The image could be a reminder to keep in mind the victims who had lost their lives to the earthquake,” he said.

In the early hours of June 13, an earthquake measuring 5.1 magnitude on the Richter scale hit Ranau in Sabah.

“I received news of an earthquake with a magnitude of 5.1 on the Richter scale which hit Ranau, Sabah, this morning. The relevant government agencies and assets must be mobilised to take all needed action,” he wrote in his native language.

The epicenter of the earthquake was located to be at 25 kilometres southeast of Kota Belud, Sabah. It caused tremors in various locations including Kudat, Ranau, Kota Marudu, Beluran, Keningau, Kota Belud, and Kinabatangan.