What would you do if you find out your husband is cheating on you? Well, that’s a rather serious question that certainly gets a lot of serious answers but one wife found a hilarious way to deal with her problem: sell her husband online! LOL.

For just Php2,400 ($48), one netizen is selling her cheating husband in a Facebook group called BENTAHAN NG MGA MOTOR 15K PABABA. BULACAN AREA. This is in Bulacan, Philippines.

Just like any other “For Sale” ad, the post describes the product, in this case the woman’s husband but the details are rather hilarious. The said husband’s age, height, and weight were described in really hilarious ways.

The seller even describes the size of his manhood in terms of canned goods – and this was one of the most hilarious parts of the ad, as can be seen in the comments on the said post. 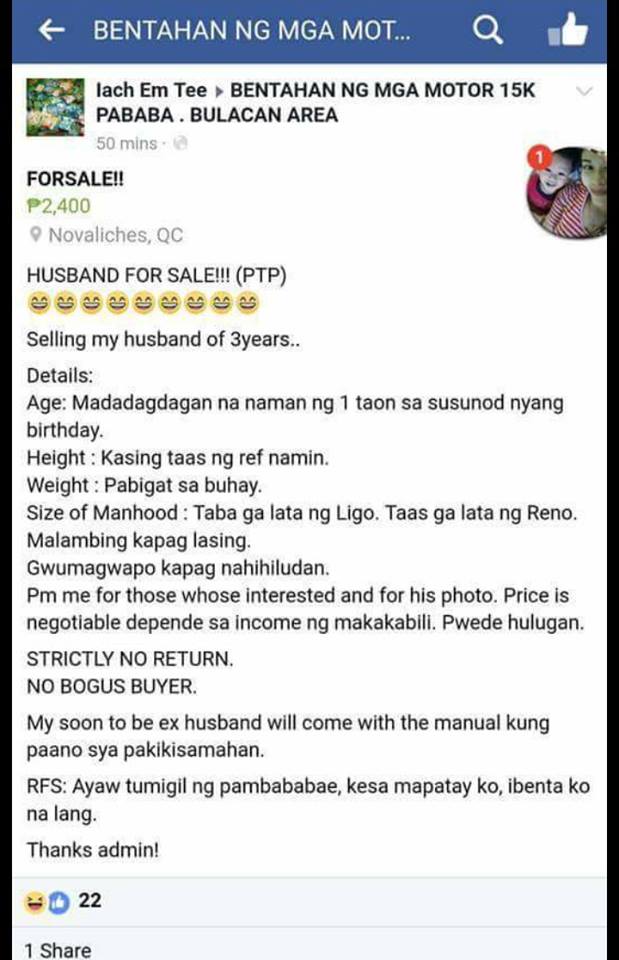 The husband’s price was listed at Php2,400 ($48) but the seller is willing to negotiate the terms and is even willing to accept installment.

She does warn the buyer that the sale is final and that she is imposing a “STRICTLY NO RETURN” policy; but in true online seller fashion, she also indicates that bogus buyers should not reply to the post.

Now, prospective buyers would surely be asking why she’s selling this product; thus, she posts her reason for selling (RFS) – that he doesn’t stop cheating on her so she’s selling him as she’s afraid she might kill him instead.

It was clear that the post isn’t meant to be taken seriously. Still, netizens were amused by the ad, with some wishing that getting rid of cheating husbands (or wives) could be this easy.

What is a Bogus Buyer?

Bogus buyers are those who do not pay up their winning bids in online shops.