Netizens are livid over a ‘rude’ wedding invitation wherein a couple grouped their guests based on rank – and specifically made instructions that obviously put one group at a much higher rank than the others! Tsk. Tsk.

Mary von Aue (@von_owie) shares a photo of the instructions that came with a wedding invitation. It is unclear whether it was Mary who had actually received the invitation or had only taken a photo from something a friend received.

But what is clear is that the person who received the invitation was actually in ‘Group A’ which puts him/her at the group with the highest rank among all the other guests, based on what was written on the instructions.

The invitation explained to “Dear friends and family” that they can’t have everyone at their wedding, even they wanted to have everyone there. 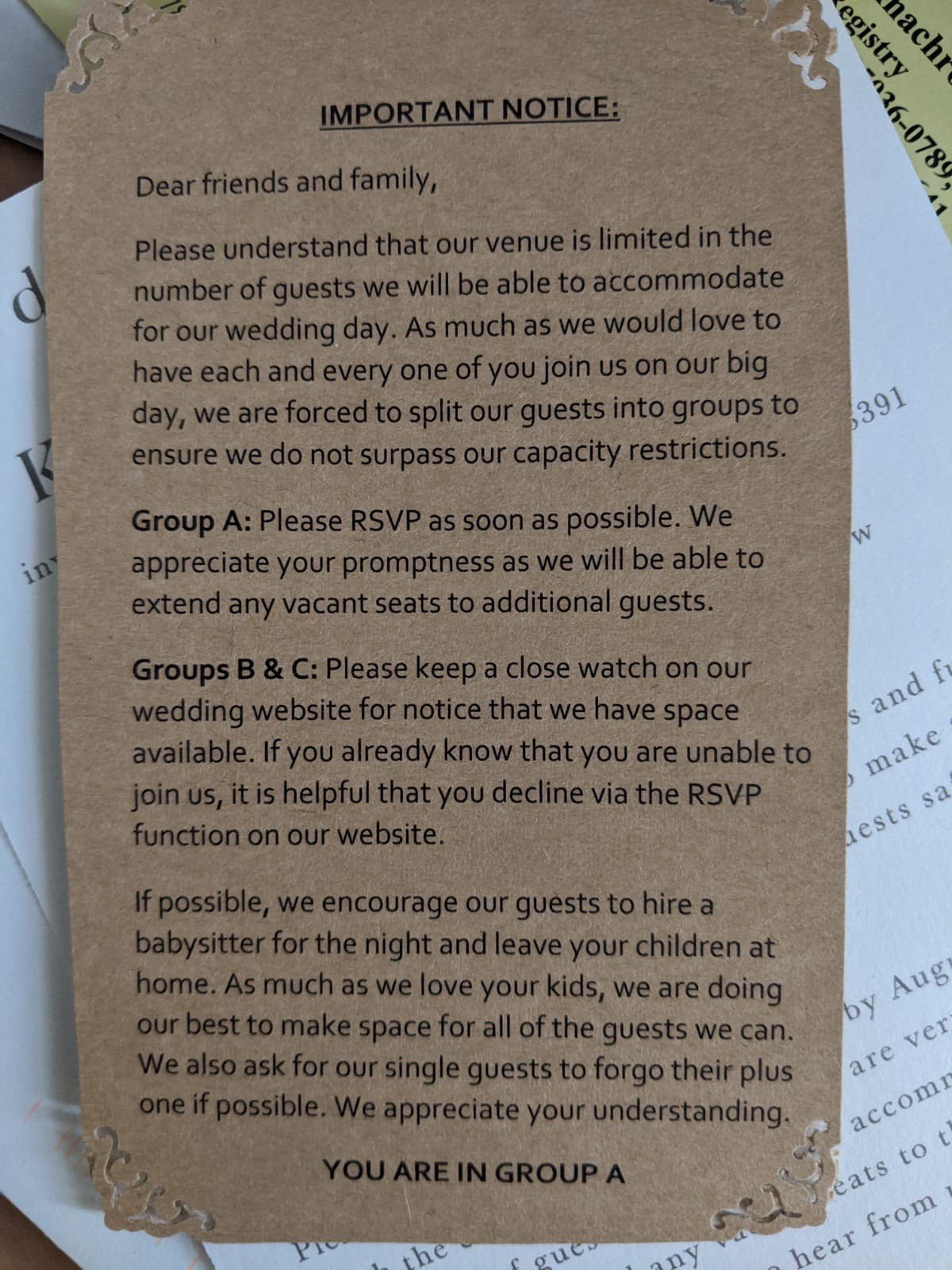 “Please understand that our venue is limited in the number of guests we will be able to accommodate for our wedding day. As much as we would love to have each and every one of you join us on our big day, we are forced to split our guests into groups to ensure we do not surpass our capacity restrictions,” the couple explained.

Then, it detailed instructions of what the groups should do. Apparently, Group A ranks higher than Groups B and C. Those who belong to Group A are told to “RSVP as soon as possible”. It was implied that those in Groups B and C could only join the party if someone from Group A cancels out.

Though there seems to be no difference between Group B and Group C, netizens assumed that those in Group C are at the bottom of the rank and are not likely to get a spot in the party.

Netizens are shocked that the couple could be so rude with the invitation. If they were unable to have everyone, then they shouldn’t have sent the invitations to these people. Apparently, the couple had also set up a website and expects those in Groups B and C to “keep a close watch on our wedding website for notice that we have space available.” Tsk. Tsk.

Not Inviting Kids to Wedding

The invitation also encourages guests to leave their kids at home, to give space to the couple’s more important guests!

But is it possible to invite people to a wedding but not their kids? In many cultures, this is frowned upon, especially because an invite to one person in the family could already mean an invite to everyone!

Yet it is actually possible not to invite kids to the wedding; though it would be a good idea to do it the polite way. While the invitation above had a polite way of saying that kids are not welcome at the wedding, the ‘rude’ ranking itself had already gotten a lot of people angry. So, the “no children allowed” part earned more anger.