Poverty should never be used as an excuse for failing in life because time and again there are lots of poverty-stricken people who have proven that one can still succeed even if they were from the lowest of lows.

Take for example Jayvee Acorita Calayag who recently graduated from Bachelor of Science in Electronics Engineering at Bulacan State University – not just as an ordinary graduate but as Dean’s Lister!

While there are tens of thousands of other graduates this year, he stands out from the crowd for being a former junkshop boy. 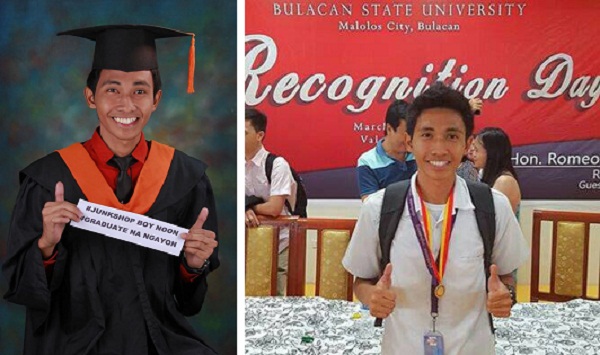 Even in his elementary years, Jayvee helped his parents scour the streets for junk they could sell to earn money for food and other needs for the family. He revealed that this had helped him understand a lot about life, especially about how hard it is to earn money yet he is not ashamed of his poor roots. In fact, he is proud of it!

In a lengthy post on Facebook, he thanked his parents for ensuring that he gets to study in college even if they had to work doubly hard since he could no longer help them as he focused hard on his education. But now that he has finally graduated, he promises to find a job and help his family have a better life.

We’re quite sure his parents are very proud of him and would no longer have to be scavengers to earn a living once Jayvee finds a job. We at RachFeed congratulate you, Jayvee, and your family for this wonderful milestone in your life! We pray for your success and hope that you will always stay humble.

Congratulations! Continue to be an inspiration to other poor kids to strive hard so they can also reach their dreams…

Thank you for all the SACRIFICES.

"It all started with a dream."