While chivalrous acts are often attributed to men, there are women who would readily go through great lengths to please their partners – sometimes, earning flak on social media for what they do.

Take for example this young woman who carried her boyfriend through the flooded streets in Wuhan, China. The Yangtze River overflowed because of incessant heavy rains, flooding the streets and leaving many people stranded because public transport has also been affected.

While many relied on those who offered their boats as vehicle for people to reach their homes, one woman went viral on social media after she was seen carrying her boyfriend across the street. Of course, such could be an act deserving applause if the guy was sick or disabled but the reason for the odd role reversal is that the couple didn’t want the man’s leather shoes to get wet in the flood!

Instead of taking his shoes off and wading through the flood waters with his girlfriend, he asked whether she could carry him. And the girl, so much in love with the guy and not wanting him to ruin his shoes as ‘he would spend a lot of time fixing it if it gets ruined’, readily agreed to carry him! 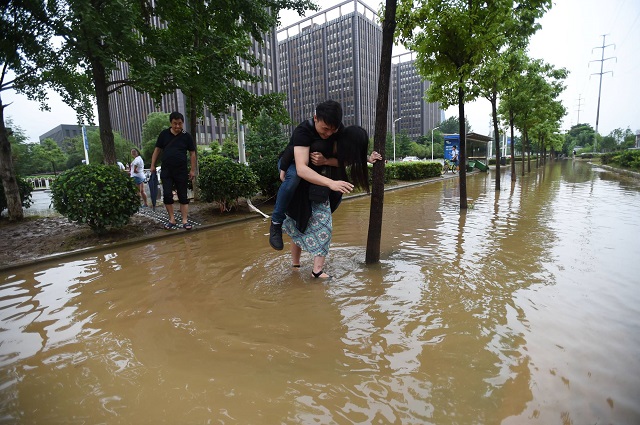 Of course, there were also a lot of people who praised the dedicated girlfriend but most disapproved of the guy’s actions.

One commenter wrote, “I understand that it’s their relationship and I have no right to say anything, but isn’t this a little over-the-top? Dude, if you don’t want to ruin your leather shoes, just take them off! And I don’t even know how to describe that girl: naive or stupid?”

Where is Yangtze River?

Yangtze River is a huge river measuring about 6,380 km (3,964 miles) long; it pours itself into the East China Sea and wounds across many areas of China.