MANILA, Philippines- A faculty member of the University of the Philippines has warned netizens not to fall prey to “gun for hire scam”.

In his lengthy Facebook post, Sir Anril Pineda Tiatco recounted his harrowing experience with a gun for hire scammer. On Tuesday, December 6, he received a text message from a certain Mark Flores with mobile number 09150495879. 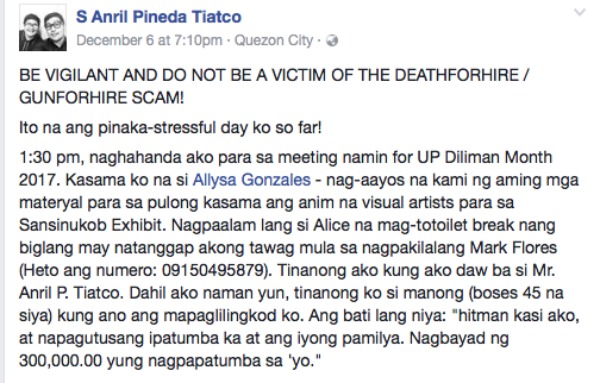 To his surprise, Flores claimed that he was a hitman and someone paid him P300,000 to have him killed.

This caused Tiatco to panic and turn off his cellphone. Minutes later, he received a death threat from mobile number 09125274338. Tiatco was told that if he fails to take action, he and his family will be harmed.

He then received another phone call from Flores. This time, Tiatco was told that he knew he was working at UP DIliman. The scammer then asked for P70,000 in exchange for his life.

Tiatco was instructed to send the amount to a certain Gracia D. Reyes, a supposed hitman of Flores.

After receiving several calls and texts, Tiatco went to Camp Crame to report the incident. At Camp Crame, Tiatco encountered another victim of the said scam, also from UP.

He then issued some tips to prevent being victimized by gun for hire scam.

What is a hitman?

A hitman is a hired murderer or a person paid to kill a specific person.. He or she is usually in the pay of a crime syndicate, like the mafia.

These hired killers have been in existence in the US since the 1920s, but the term only dates to the 1970s.