Home
News
News & Culture
Pinoy Guy Tries to Fake an Accident, Fails Because Car was Still Too Far When He Fell

Just last week, the video of a Chinese woman trying to fake an accident had gone viral, making the internet laugh at her desperate attempt at staging an accident that didn’t really happen because she fell to the ground while the car was still too far away.

It seems that the video gave one Filipino guy an idea – and the copycat also tried to do the same thing to fake an accident but just like in the original fake accident failure, his also failed because he fell to the ground while the car was still too far to have supposedly hit him.

The incident was caught on camera by YouScooper Melwin Enriquez who was glad he invested in a dashboard camera. 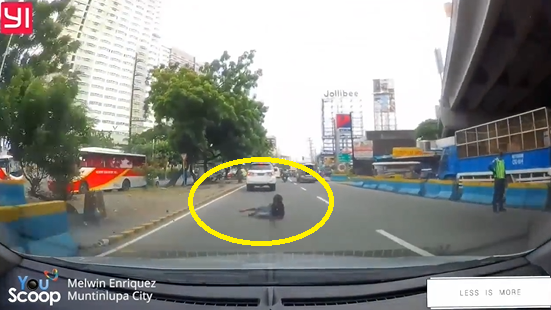 According to Enriquez, he was driving along Alabang Viaduct in Muntinlupa City last Wednesday, September 13, when he noticed a man throw himself on the street and lie down in a manner that made it appear he had been hit by the car.

But because he had flung himself too soon, the driver was able to slam on the brakes and was still several feet away from hitting the guy. Still, the man got up and held his thigh, making angry gestures at the driver.

Thankfully, a traffic enforcer who was just across the street went to investigate the matter before things escalated. It really was a good thing Enriquez had a dash cam to prove he has not fault whatsoever should the man try to insist he was hit by the car.

Is it a Good Idea to Get a Dash Cam?

The answer is yes! While a dash cam can be another costly item to buy for your car, it is more than just an accessory because can provide added security to your ride. It can record things happening in your car while you’re not around, as in the case of a valet or maintenance person using the vehicle.

It will also come quite handy in times of accidents – or fake accidents, such as in the case above.

Of course, getting a dash cam won’t stop you from getting hassled by crooks like this man but at least you have proof of your innocence.