An overseas Filipino worker (OFW) who came from Macau aboard Philippine Airlines (PAL) Flight 353 complained that the contents of his luggage were stolen either by airline staff or at the Ninoy Aquino International Airport (NAIA). But after his story went viral on social media, PAL released CCTV footage to clear their name.

Amado Neri Aguilar III, a director and segment producer on TV5, posted on Facebook some photos on videos taken when his OFW brother, Arnulfo Aguilar, arrived at the NAIA from Macau.

The OFW shows them the torn bag whose contents were lost, including two pairs of Stan Smith shoes and other pasalubong items.

The post tags the airline as well as several news agencies, with the younger Aguilar claiming his older brother felt worse because after losing the contents of his luggage, the people he tried asking for help made him go from one person to another so that he eventually gave up trying to find justice over the lost items.

Aguilar later expressed admiration that his elder brother didn’t let the stress bring him down, instead made a lot of jokes while they enjoyed dinner and said that he will let karma do its thing on whoever stole the items.

The post quickly went viral, with many people expressing disappointment that yet another hardworking OFW had his items stolen at the airport. 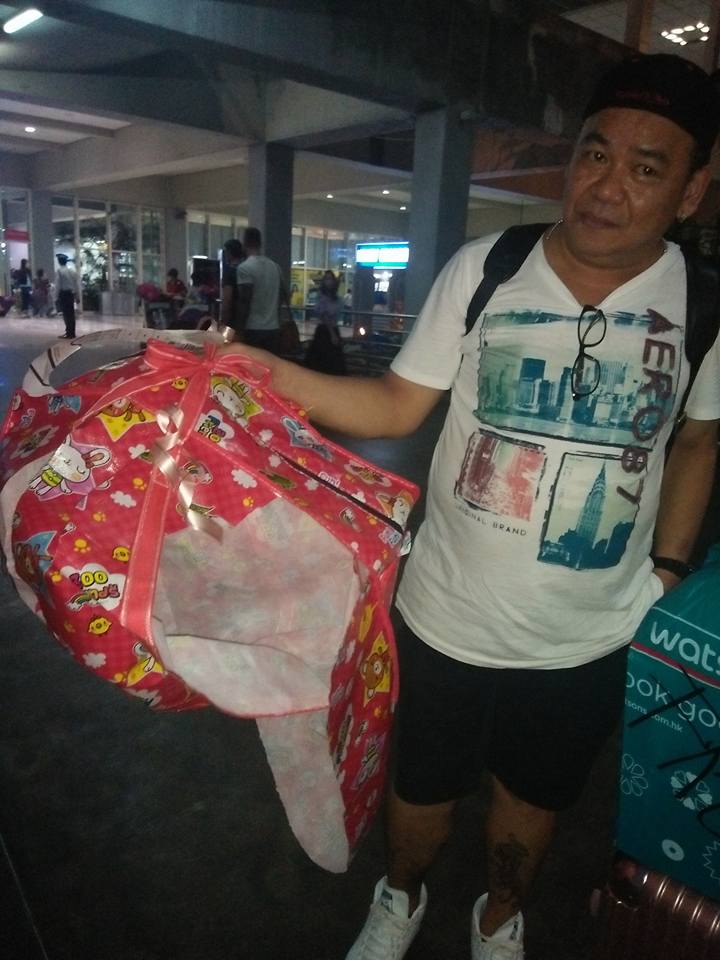 But PAL would later refute this claim, releasing CCTV footage taken at the airport as well as Aguilar’s luggage check-in ticket. Based on data printed on the ticket, Aguilar checked in three bags.

Footage from the CCTV showed Aguilar’s red bag, the same one pictured in the viral post. But the bag was already torn, with its contents shown on CCTV as another bag – and it is the blue bag that was part of his luggage when he went out of the airport.

It is unknown, however, if the red bag was just used to cover the blue bag or if there really were Stan Smith shoes that were also placed inside, between the red and blue bags but based on the CCTV footage, Aguilar didn’t appear agitated when he picked up the torn bag.

Contrary to his brother’s post, Aguilar didn’t also try to complain about the lost luggage but immediately proceeded to the gate, based again on the CCTV footage.

PAL has since asked Aguilar’s brother to take down the post but as of press time, it is still up and available to the public.