Former Department of Health (DOH) Secretary Juan Martin Flavier passed away last October 2014 yet it appears that his legacy continues to grow in the lives of the people touched by his numerous health programs.

One perfect example comes in the form of Sandra Magalang, the Class Salutatorian of the UP College of Law Class of 2014. Did you know she had just ranked third in the latest bar examinations? We can formally call her as Atty. Sandra Magalang now!

From cross-eyed girl to brilliant lawyer

But her topping the bar is just a portion of an inspiring story – because once upon a time, she was a poor, cross-eyed girl who had low hopes of ever making it big or even summoning the courage to finish school.

Enter Sec. Flavier’s “Oplan Sagip Mata” which was launched over 20 years ago. This health program continues to benefit thousands of people, especially kids, with eye defects. 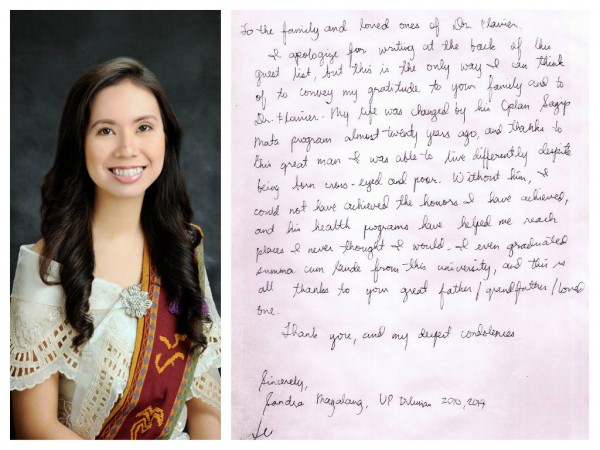 She came to the limelight last year at Flavier’s wake. She had left a handwritten note at the back of the guest list, thanking the late secretary of health for his program. At the time, she had already graduated from law school and was eternally grateful for Flavier’s help.

Flavier’s son, James, found the note and posted a photo of it on Facebook.

To the family and loved ones of Dr. Flavier.

I apologize for writing at the back of this guest list, but this is the only way I can think of to convey my gratitude to your family and to Dr. Flavier.

Thank you, and my deepest condolences.

Then, when the bar exam results were released on March 26, 2015, her name was listed as the third placer.

Who would have thought that one poor, cross-eyed girl would grow up to be such a brilliant, beautiful young woman who’d soon make the headlines for being one of the topnotchers of the bar exam?

Congratulations, Atty. Sandra Magalang! You are a beautiful inspiration to others.