For many decades, millions of Filipinos have been leaving the country, not only to find work but to have a totally different life from the one they have in the Philippines. Some Filipinos have even become desperate to leave the country that they even loan money or use their lifetime savings to take the risk in order to have a better life in another country.

Whatever reasons they have, Filipinos who take the risk and leave the country have made a personal decision to change their life in the hopes of having a better future. 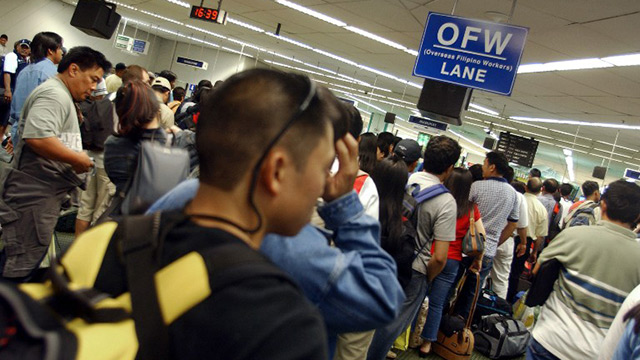 Millions of Filipinos have left the country in hopes of a better future.
Photo Credit: Rappler

Here are ten reasons why many Filipinos leave the country and go abroad.

A variety of jobs, white collar or blue collar ones, await Filipinos abroad. This is the most conventional reason why Filipinos leave the country. Working overseas could certainly mean less taxes and better wages.

2. Some Filipinos feel that their government is hopeless.

Filipinos are discouraged to stay in their homeland mainly because of the government system. Many of the country’s government officials are charged with corruption, and there are only limited benefits that the government can provide. Comparing the Philippines to other countries, some Filipinos have lost all hope and faith in the government.

People have the notion that those who work overseas are wealthy, successful individuals. However, the truth is, these OFWs work hard to improve themselves. Their aim is career growth and progress. They take up advanced and specialized courses that are not available in the Philippines.

By going to another country, criminals get away from being persecuted. Some countries don’t have extradition agreements with the Philippines. This, in effect, assures criminals of their safety. There have been a lot of prominent government officials and wealthy Filipinos who have left the country in order to escape persecution.

5. Some Filipinos feel that they are only suffering in their homeland.

Filipinos who suffer in their homeland do all they can to be able to leave the country. They simply want to escape their situation and forget all the bad experiences they had in the Philippines.

6. Many Filipinos don’t feel safe in the Philippines.

Crime rate in the Philippines, especially in Metro Manila, is relatively high. Many Filipinos fear that their family would become victims of these crimes, and think that a life abroad would bring them more security.

7. Many Filipinos want to have a diverse experience.

Many Filipinos want to break their life of routine in the Philippines and have a diverse experience. They want to discover greater things they could only possibly do in another country. They feel that there are limited opportunities in the Philippines, hence, they leave the country.

8. Filipinos love to explore and travel.

Filipinos have a sense of exploration. Filipinos want to see the world with their own eyes, shop, take photos, venture into new things, and make great memories through travelling. Many Filipinos have more opportunities to travel when they live in other countries.

9. Many Filipinos have family members or relatives abroad.

“Bakit di ka mag abroad? Mas maganda ang buhay dun, tignan mo si ano, mayaman na, may maganda ng bahay!” (Why don’t you go abroad? Life is better there. Remember this person, he’s already wealthy, he has a beautiful house!) These are just some of the statements we usually hear from families and friends of those who have lived or are working abroad. Many Filipinos are pressured to earn more money or have their own assets, which they think, is not possible living a life here in the Philippines.

Poverty is not the sole reason why more and more Filipinos are leaving the country. Fact is, there are many reasons that the Philippine government needs to address in order to encourage more Filipinos to stay in their homeland.