Disturbing photos and videos showing the tied hands of a tortured female monkey which brutally died under the hands of four medical students have sparked outrage among netizens after it emerged online.

One of the heartbreaking photos was shared by animal lover and activist Shravan Krishnan on his Facebook account. 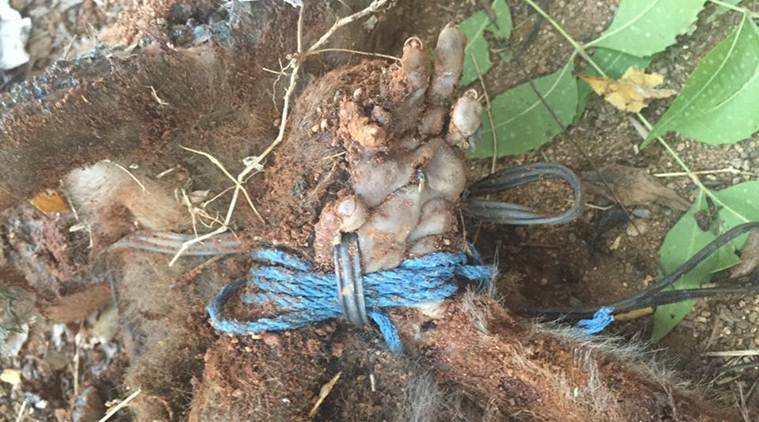 According to Krishnan, the brutal killing of the monkey was carried out by medical students in Christian Medical College in Vellore in India  on November 19.

In his post, Krishnan wrote: “They tied her hands and started abusing and torturing her by beating her with sticks and belts, broke her legs, jaws and finally put a rod up her anus and killed her.”

Krishnan added that all the bones of the monkey were cracked while the neck of the animal was “choked by a telephone wire”.

“Students say they inserted a sharp object into the animal’s genitals,” said Antony Rubin of the Animal Welfare Board of India.

Apparently, a few students from the college discovered what happened and urged the campus authorities to take action. However, authorities failed to respond to their reports prompting an unidentified student to report the incident to PETA India.

Shortly after receiving the information, animal rights activists, in the presence of police and forest officials, pulled out the monkey’s body from an area near the campus. The body was immediately sent for post-mortem examination.

Based on initial investigation, the monkey, along with 40 to 50 other monkeys, had been disturbing hotel inmates in their rooms and mess.

The four students involved in the killing of the monkey were immediately suspended but a college official confirmed that they would impose a tougher penalty if the accused are proven guilty.

What are the forms of animal cruelty?

According to cfawr.org, there are two types of animal cruelty: active and passive cruelty. When a person inflicts active cruelty, he or she has the deliberate intent to harm an animal by creating immediate pain and suffering. Meanwhile, passive cruelty is inflicted when a person wilfully neglects the animal resulting to prolonged suffering.