Social media has become a powerful instrument in spreading awareness among people. A netizen named Trina Marquez used Facebook in order to warn other people against a cunning Petron gas boy who victimized her.

Through a Facebook post on May 1, Marquez detailed how the gasoline boy almost tricked her at a Petron gas station. Although she had her car refuelled amounting to P1,000, the gasoline boy only refuelled it with P500 worth of gas.

According to Marquez, her car gauge is supposed to be 3/4 full if the gas boy refuelled it with P1,000 worth of gas. Believing that there’s something fishy going on after checking her gas gauge, she asked the gas boy for an official receipt. Her suspicions grew stronger after the gas boy was unable to provide a receipt saying that it was already thrown in the trash.

The gas boy’s alibi didn’t convince Marquez so she decided to ask for a copy of the receipt from the cashier. However, the cashier failed to track such transaction after 30 minutes.

Marquez then directed her complaint to the supervisor who asked for her contact details and advised her to come back the next day.

The following day, Marquez was informed by the supervisor that the gas boy admitted what exactly happened yesterday. 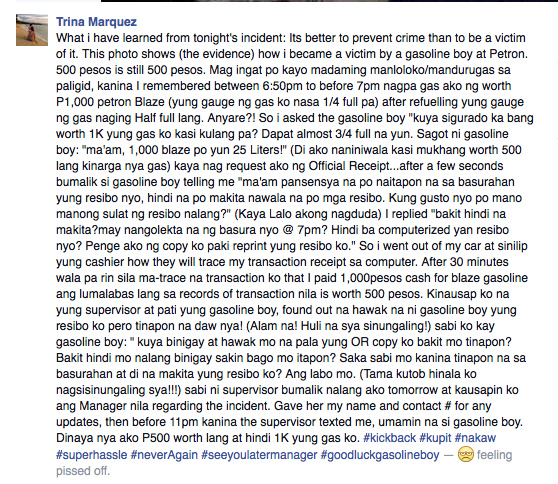 According to the oil firms, the increase in prices was brought about by the movement of prices of refined petroleum products in the world market.

Gasoline and diesel prices increased by 95 centavos and 65 centavos per liter, respectively.