MANILA, Philippines– Child beggars are a common sight in the Philippines, particularly in Metro Manila. Through the years, these young children have employed several tactics to get alms from strangers.

But this young girl’s modus operandi to get alms from a driver is probably one of the most alarming ones we’ve heard so far.

When netizen Mary refused to give alms to a girl while driving in front of UP Town Center at the intersection of CP Garcia and Katipunan in Quezon City, the girl did something you wouldn’t expect from an innocent child. Initially, Mary tried to ignore the girl. However, when the girl’s voice grew louder and louder, the driver realized that the girl was holding a rock she would use to break her car window if she wouldn’t give alms.

Mary thought of spraying pepper spray to defend herself but aborted her plan realizing that the girl is still young.

Luckily, the girl didn’t break her car window but moved to another car to threaten the driver. Mary then took the opportunity to snap a photo of the girl holding a rock.

Mary wrote in her lengthy Facebook post: “When I was starting to leave she stopped in front of my car and aimed the rock at my car again. I am shocked and appalled at what this girl is capable of.”

Check out her full story below. 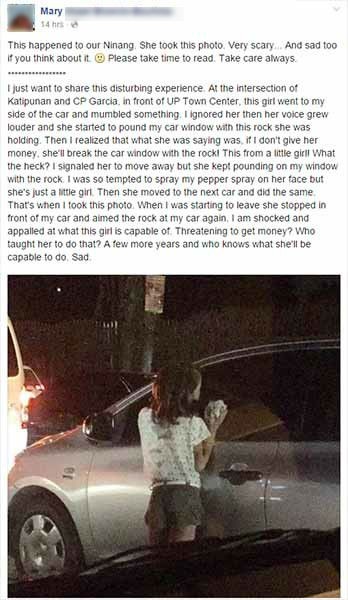 CBCP: “Give food, not money to street beggars”

In 2013, Fr. Melvin Castro, an official of the Catholic Bishops’ Conference of the Philippines (CBCP), urged people to give food instead of money to beggars just to make sure that it won’t go to syndicates.

In an interview with MANILA BULLETIN, Fr. Castro said: “To be safe don’t give money to street beggars. Just prepare rice and canned goods to make sure that it will not fall into the hands of syndicates. Anyway, our assumption is they are asking for money because they want to buy food.”