What would you do if you see a dead turtle? Would you bury it or at least leave it where you found it? Well, these two guys thought it would be “cool” to stand on top of it and pose for a photo.

Ricky Rogers, a self-confessed, animal lover, recently shared the image on Facebook where two guys can be seen “surfing” on top of the dead turtle. It was captioned “Surfed a tortoise on zee weekend.. gnarly duddddeeeee (sic).”

The photo is believed to have been taken at Fraser Island in Queensland, Australia. As it appears on the photo, the men were holding beer cans. 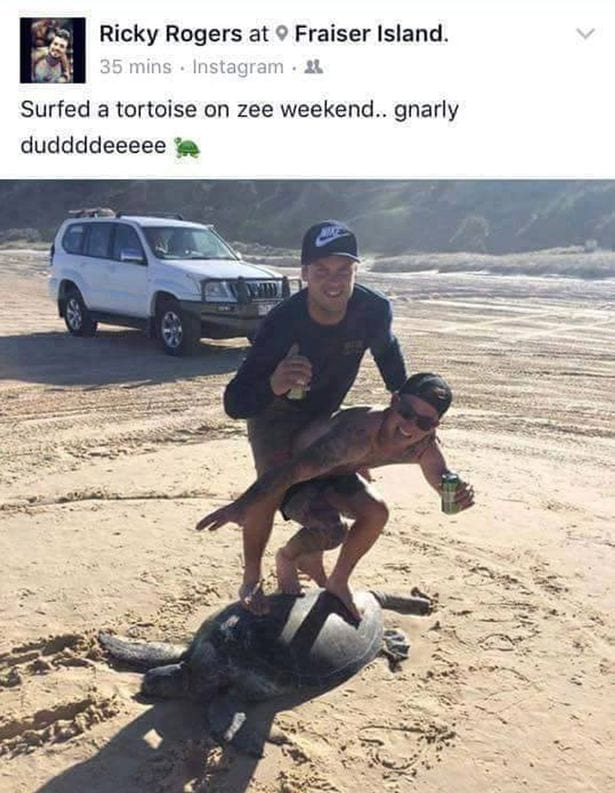 Before the photo was taken down, one of the commenters wrote:

“When your brain is the size of a peanut, your thought process is ridiculous. Share this around and let’s see if we can get this fool a nice hefty fine.”

Meanwhile, Micheal Beatty, a spokesperson from the RSPCA (Royal Society for the Prevention of Cruelty to Animals), labeled the men ‘complete idiots’ for what they did.

Investigations are currently ongoing but many are saying that whether the turtle was really dead or not, these two men will be subject to fines once proven guilty.

What Can We Do To Stop Animal Cruelty?

“Because animals cannot speak for themselves, it’s up to YOU to speak for them and report animal abuse that you witness or suspect… If you want to help animals in your community, familiarize yourself with your state’s laws, recognize the signs of abuse and be willing to report it.”

“Most large municipalities have a local animal control department, animal shelter or humane society. Do an online search to identify the agency in your area, and program the number into your cell phone so you are prepared.

“When you make the call, tell the officer as many details of the situation as you can—i.e., the location, date and time, and descriptions of the people and animals involved. Video and photographic documentation (even a cell phone photo) can help bolster your case. It’s also useful to give names of others who may have witnessed the incident.”