Home
News
News & Culture
After Being Mocked on Social Media for Staring into Jewellery Shop, Cleaner Receives Sets of Gold

Who would have thought that a stolen photo posted on Instagram would bring fortune to a 65-year-old Bangladeshi cleaner in Saudi Arabia?

Nazer al-Islam Abdul Karim was staring at a jewelry shop in Saudi Arabia’s capital Riyadh when a stranger decided to snap his photo and posted it on Instagram. Unfortunately, the Instagram user who shared his photo only wanted to mock the old man. 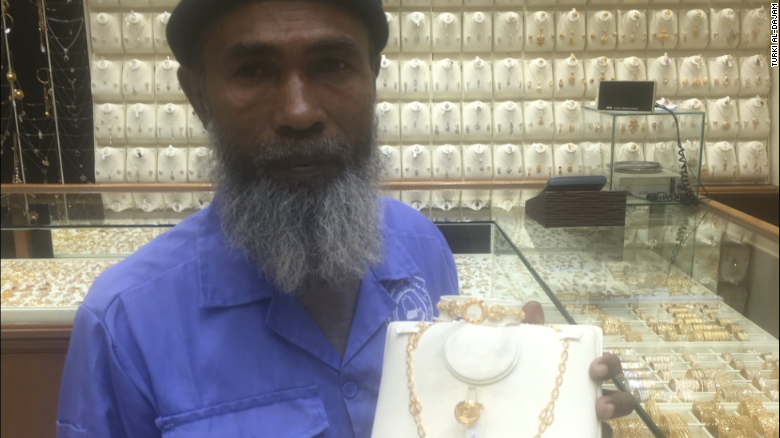 “This man deserves to only look at rubbish,” the Instagram user wrote on the photo’s caption.

But instead of receiving insults from other netizens, Karim surprisingly received an outpouring of support. A certain Abdullah Al-Qahtani, who has a Twitter account called ‘Ensaneyat’,started a campaign to find the poor man in the photo. Barely three hours after posting the tweet, which was shared over 6,500 times, Al-Qahtani found Karim with the help of some Twitter users.

Good samaritans showered Karim with gold sets, large sums of money, bags of rice and honey, an iPhone 7 and Samsung galaxy as well as return tickets to his home country. Money is still being sent for the cleaner who captured the hearts of social media users.

Delighted with his gifts, Karim, who earns $187 monthly, said he was surprised to learn that his photo went viral on social media.

“I was just doing my job as a cleaner in the municipality and found myself in front of the gold shop. I am very happy about the gifts and very thankful,” Karim told CNN.

Why do people value gold?

Why do humans choose to use gold as currency over all the 118 elements in the periodic table?

According to a report by BBC News, chemically speaking, gold is uninteresting because it barely reacts with any other element. But gold’s relative inertness is the exact reason why gold is considered precious.

“Gold’s relative inertness means you can create an elaborate golden jaguar and be confident that 1,000 years later it can be found in a museum display case in central London, still in pristine condition.