MANILA, Philippines- How far will you go to land a date with your dream girl? For netizen Aaron Santos, it meant moving heavens to get 5,000 likes, 2,500 comments and 2,500 shares on Facebook.

In order to catch the attention and get a chance to date his dream girl and competitive gamer, Bianca Yao, Aaron challenged himself into getting the specific amount of likes, comments and shares on his post within a day.

Aaron wrote in Facebook message sent to Bianca: “Hello biancrush, I don’t usually do this, but I will give it a shot. 5k likes, 2,5k comments, 2.5 shares. Then we’ll go out on a date. G?”

It took Bianca three weeks to respond to Aaron as his message landed in the “Others” folder of messages. Intrigued by Aaron’s funny proposal, Bianca decided to give him a shot, thinking that he wouldn’t be able to reach his target in a day.

But a few hours after their conversation, Bianca discovered that Aaron posted a screenshot of their conversation and was enlisting the help of netizens. Within 24 hours, Aaron’s post went viral and amassed 100,000 likes, 13,000 comments and 3,000 shares, surpassing his target. 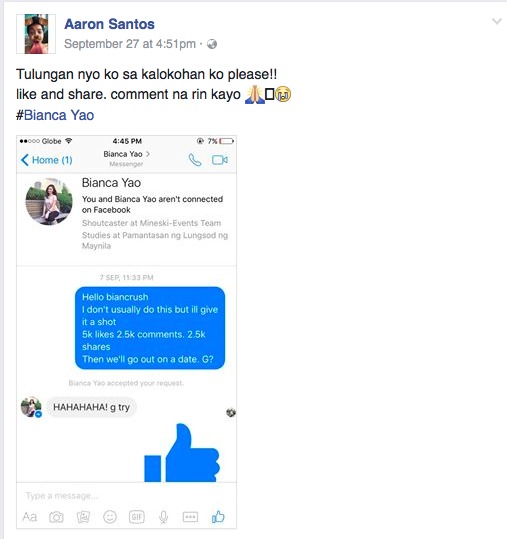 Because she wanted to stay true to her word, Bianca eventually agreed to go out on a friendly date with Aaron. 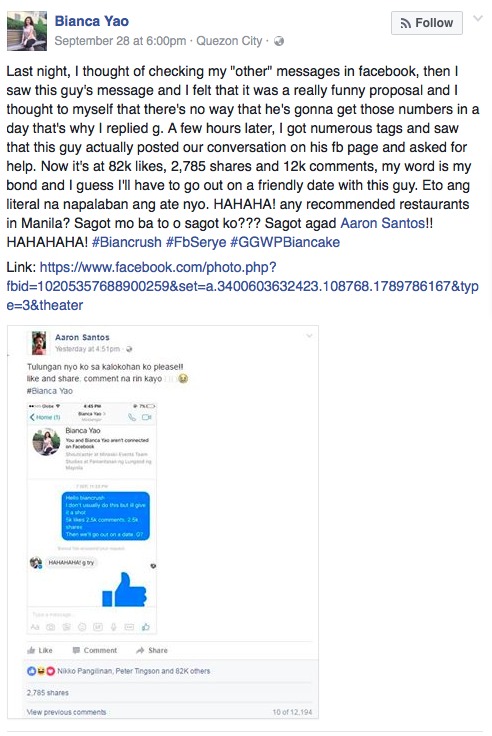 Aaron and Bianca, whose apparent tandem has gained massive following on the social network, are set to go on a date soon but the two haven’t revealed details about it.

What does friendly date mean?

Friendly dates, unlike romantic dates, means going out with someone to have fun without expecting something serious to come out of it in the near future.