As wildfires continue to spread in Southern California, tales of heroism continue to rise amid the bleak news reports. And one of these heroes is Allyn Pierce, a nurse who manages the ICU at Paradise’s Adventist Health hospital in the town of Paradise.

Like many people trying to flee the raging fires or rushing to go home to save their family, Pierce found himself suddenly trapped in the middle of the blaze by a truck burning in front of his vehicle.

When a bulldozer knocked the burning truck out of the way, Pierce had the option to save his own life and drive on. Instead, he drove to the hospital and helped evacuate the patients. Along with first responders on the scene, they moved the patients to the helipad and created a triage center at the car park.

But though Pierce was able to save many lives that day, his car suffered major damage. Its sides were badly burned but amazingly the structure held up and the tires didn’t burst in the extreme heat!

Impressed by the vehicle’s durability and also thrilled to have saved lives in his hometown, Pierce half-joked in an Instagram post about his ‘Toyota USA commercial’. 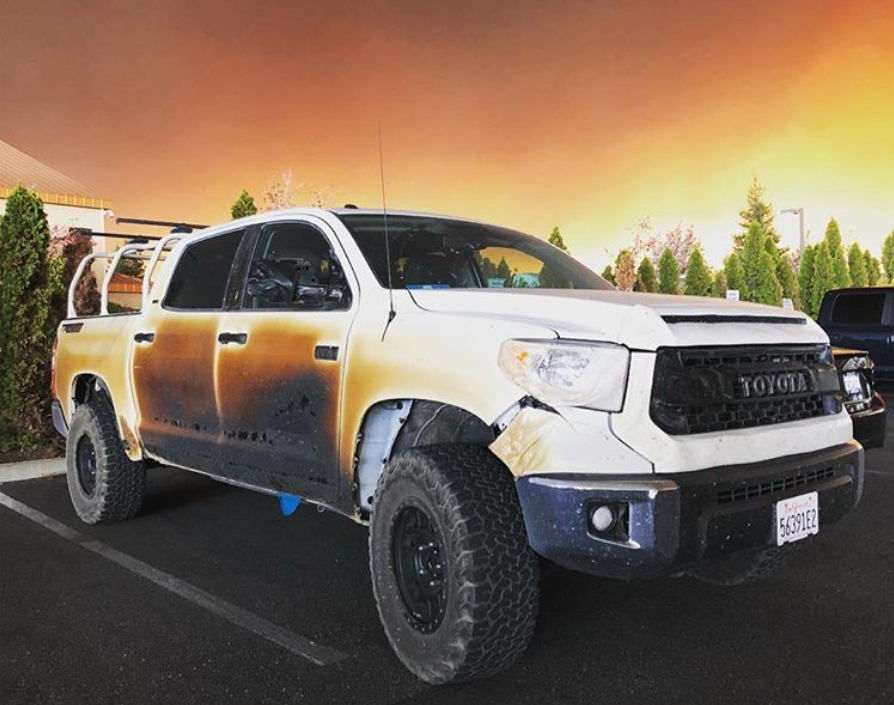 “Here’s my @toyotausa commercial. This truck literally saved my life today. My little town of Paradise was literally burning down around me and @the_pandra got me to safety where I could help others…twice. #campfire #perfectmarshmellow #meltedplastics #buttecountyfire #sema2019

Thanks to the fire fighters, law enforcement and my fellow healthcare workers for the work we all did getting the hospital evacuated and our patients to safety. 🤘🏼😔”

The post has gone viral, gaining over 70.5k likes in 5 days. Many hailed Pierce a hero for risking his own life and his vehicle to save lives when he could have easily gone to save himself.

Indeed, Toyota USA was just as impressed with Pierce’s heroism!

“We are humbled you’d risk your life and Toyota Tundra to drive people to safety. Don’t worry about your truck, we’re honored to get you a new one,” the brand’s official account wrote.