A missing surfboard in Hawaii turns up in the Philippines some 2 years later, journeying thousands of kilometers away! Wow. Isn’t that impressive?

Surfboard from Hawaii Journeys to the Philippines

It was back in February 2018 when Doug Falter lost his favorite surfboard at Waimea Bay in Hawaii.

“It was the biggest day of surf I’ve ever experienced. I fell on a wave and the board came off my leg. I climbed all the way across the rocks as far as I could to see if I could find it and I couldn’t,” Doug said.

After hours of trying to find the board, Doug gave up searching but posted about the lost board on Facebook. He hoped that someone would find his favorite board and return it to him.

“LOST BOARD!!! Please share! I was surfing Waimea tonight and lost my board around 6:30pm. My board floated off into the channel and kept on going. There is a solid chance it washed up somewhere on the beach or on the rocks between Waimea and Haleiwa. If anyone sees a light bluish grey Lyle Carlson surfboard washed up please message me or call me,” Doug wrote, adding his number.

But nothing came up. No one messaged him – not until 2 years later, but from someone totally unexpected: a guy from the Philippines! 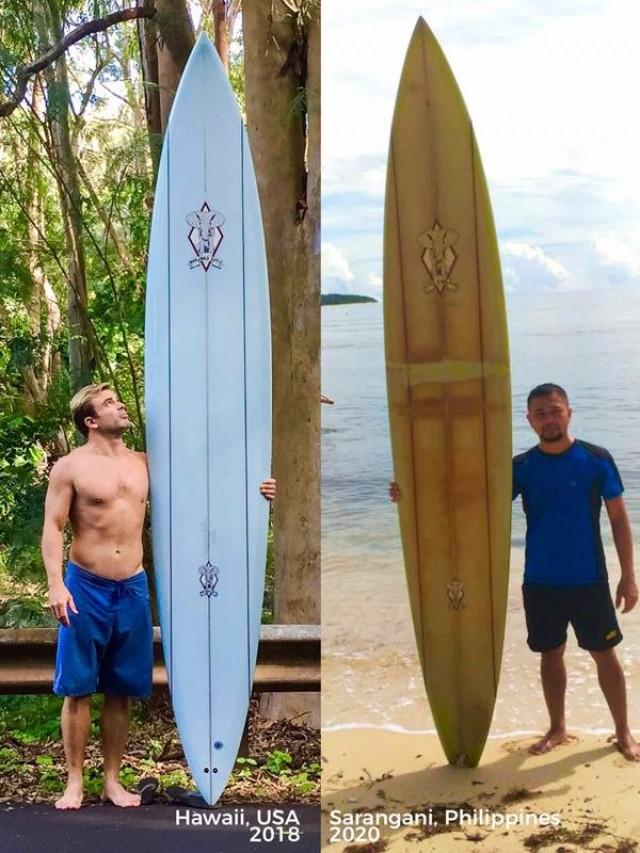 In Balut Island in Sarangani, Philippines, thousands of kilometers away from Hawaii, a fisherman named Abdul found the board in August 2020. He first thought it was part of a shipwreck but was surprised that it’s actually a surfboard.

Abdul sold the surfboard for Php2,000 to a teacher named Giovanne who’s assigned to the island with his wife. A teacher-in-charge at an elementary school in Barangay Ibran,            Giovanne was curious as to who might originally own the surfboard.

So, the first thing he did was search the surfboard maker’s name on the internet, Lyle Carlson. He came across Doug’s post, but wasn’t sure it was his board because the guy lost his board more than 2 years ago in Hawaii.

But after the two connected, they were quite surprised to realize that, indeed, the surfboard Doug had lost in Hawaii made its way to the Philippines! It had already faded to brown from its original blue color, but Doug had written his name at the back of the surfboard – and Giovanne found it later.

Giovanne was thankful because he wished to have a surfboard but such boards are too expensive for him. Soon after he connected with Doug, the kind man didn’t even ask him to return the board (shipping that would be too expensive, of course!) but also raised funds to provide the teacher’s students with books and other materials to learn English. Wow.

Lyle Carlson surfboards are surfboards crafted and sold by Big Wave surfer and shaper Lyle Carlson in partnership with master board builder and craftsman Dick Brewer in Oahu and Kauai for over 10 years.