In a post that had gone viral on Facebook, Karla Monique Olandesca shamed a guy for not giving up his seat so she could sit down. Posting a close-up snapshot of his face, Olandesca shared how this guy did not act the gentleman even when she was standing right in front of him.

According to Olandesca, the guy should have given up his seat for her but even if he glanced at her once in a while, he never got up to give the seat – and she was forced to stand for the entire ride while he was comfortable on that seat. 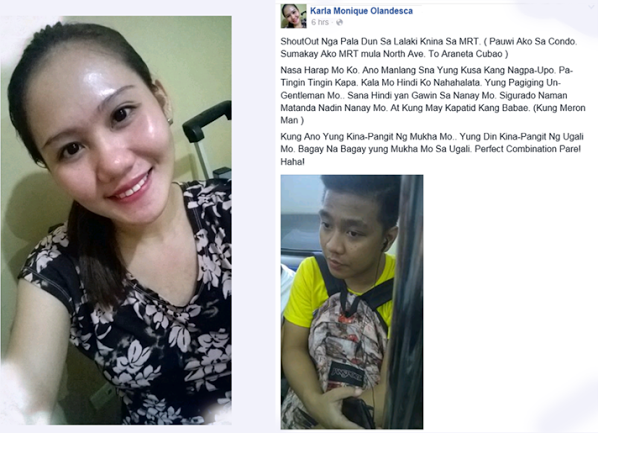 She hopes that his mother (who she believes is most certainly old already) and his sisters (if he had any) won’t suffer the same treatment that she received from him.

Had she ended the post there, netizens would have been more lenient but the girl insulted the unnamed guy on the post, saying that his attitude is as bad as his ugly face. This earned her a bashing from social media users.

Olandesca posted the guy’s snapshot to shame him for his “un-gentleman” behavior but she ended up being the one shamed on social media.

The guy was later identified as a certain Aldrin Ryan L. Alcon who is a working student studying at STI College.

But while most people took Alcon’s side in the issue, he was actually gentleman enough not to insult the Olandesca on social media. Instead, he actually asked forgiveness that he wasn’t able to give up his seat for her! 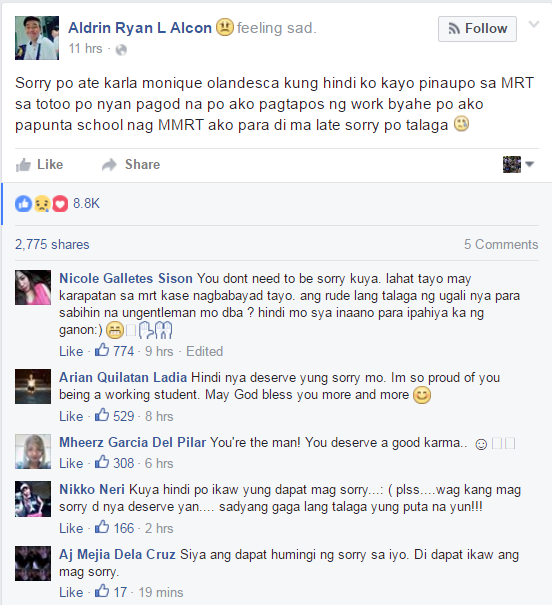 In a post on Facebook, Alcon admitted that he was feeling sad and that he wants to apologize to Olandesca because he wasn’t able to give up his seat as he was tired at the time from work but was on his way to school at the time.

Netizens who commented on his equally viral post remarked that there was no need for him to apologize because everyone had the right to sit down on the seats at the MRT and priority sitting is only required for pregnant women, women with children, old people, and PWD – and Olandesca, definitely, does not fall under any of these categories…