Home
News
This Baguio Security Guard Is Now A Lawyer

BAGUIO CITY, PHILIPPINES – Roy Lawagan, a guy who works as a security guard, has just become an inspiration for many after successfully completing his education and passing the bar exams.

According to the Inquirer website, Lawagan was one of the 1,731 new lawyers who passed the said exam and now he’s merely counting the days till May 15 when he can quit his job and start working full-time as a lawyer. 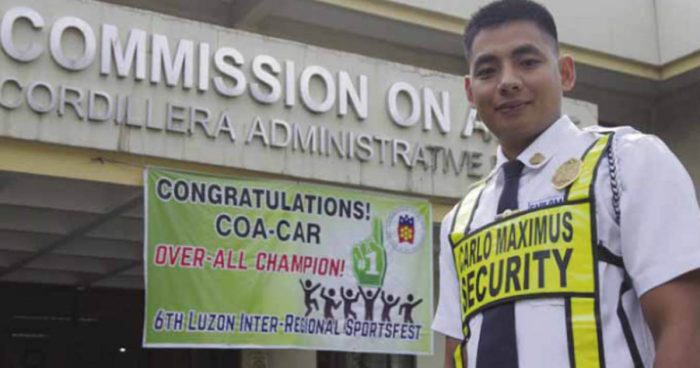 Turning 27 this May 11, Lawagan aimed to pass the bar as an early gift for himself. He said he worked hard on his education and had to attend night classes for his first year as a law student. This proved to be challenging since his wife was pregnant at the time with their now 4 year old daughter.

Lawagan reflected, “Being a lawyer was my father’s dream.” The security guard-turned lawyer is the fourth among nine children. Although some of his sisters graduated with political science degrees, he said they chose not to practice law in the long run.

This Sagada-born hardworker studied at the University of Baguio as a criminology student and then completed his law studies at Saint Louis University. Again, things did not come easy for him as he encountered difficulties and obstacles along the way, one of which was failing the 2014 bar exam despite having enrolled in a review center.

For the 2015 exam, he determined to study on his own and that finally sealed his victory.

After celebrating with his family, he reported for work at the Commission on Audit office in La Trinidad, Benguet, in full security guard uniform. He said he’ll be working there until May 15.

Soon thereafter, he will be grabbing his cousin’s offer to fulfill his dream and finally work at a Manila-based law firm. “I will go there to gain experience,” said Lawagan.