If your loved ones abroad are sending a balikbayan box to you, how would you feel? I bet you would be really excited – just as Mikey Bustos felt when he learned his mom was sending him some.

In his excitement, he was able to create an awesome song, a hilarious parody to Miley Cyrus’ “Wrecking Ball”.

Now, he was listing everything he could imagine would be the contents of the balikbayan box. He knows there would be some chocolates, shampoo, and second-hand clothes which he does not mind because these are branded.

He also wishes there would be some Canadian money somewhere inside the box. Brand new shoes and imported food were also some of the things he hopes would be inside.

Watch the hilarious video and get ready to have some good laughs at Mikey’s antics:

The balikbayan box is another item that shows just how different the Filipino’s culture is compared with the rest of the world. The box is not just a way to extend the trait of giving pasalubong to friends and family after traveling but also a way to save money.

Balikbayan boxes come in three standard sizes; though most OFWs choose the largest option – the extra large [24 x 18 x 24 inches] – to maximize their savings. Most of the time, shipping costs are fixed per box, not by the value and weight of its contents. Thus, overseas Filipino workers (OFWs) try to pack the box well so they can maximize the space inside.

Just as Mikey Bustos had pointed out, most balikbayan boxes contain an assortment of goods which range from personal hygiene products to clothes and whatnots. Many also include gadgets and electronic devices inside as well as toys for kids, power tools, and various items the OFWs think would be useful and appreciated by their families back in the Philippines. 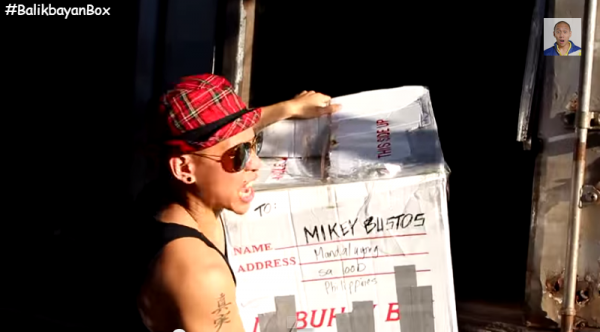 What made OFWs choose to send balikbayan boxes over smaller, individual packages is the huge difference in shipping costs. However, the tradeoff here is that the balikbayan box does not arrive as fast as ‘regular’ parcels. Also, there have been many complaints of balikbayan boxes getting lost in transit, never to be received by its intended recipients, or lost items [especially electronic gadgets and expensive stuff].

Despite the many negative reports about mishandling and theft, OFWs continue to send their families balikbayan boxes via DTI-accredited shippers and forwarders.

So, have you ever received [or sent] a balikbayan box? I hope the contents were more exciting than the ones on Mikey’s box. LOL.