While the world was supposed to be focused on the swimming match the 400 meter individual medley at the Rio Olympics on Saturday, there was a guy in the sidelines who caught everyone’s attention – for he was screaming his heart out and jumping around like he was going crazy. Well, he really was going crazy but not in a bad way, really.

For this guy is Shane Tusup, the coach and husband of Hungarian swimmer Katinka Hosszu who, thanks to her impressive skill and her husband’s maniacal cheerleading skills (LOL), managed to win the gold medal for the match! 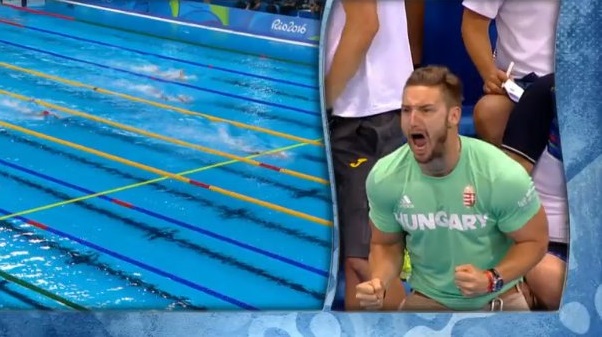 Screenshot of video by ABC News

Katinka slammed the world record by 2 seconds – and everyone is crediting it to Shane who is said to have been the one responsible for her upgraded skills in the sport as he created a new plan of action involving less training and doing more racing.

Their hard work paid off big time because Katinka was able to beat the competition to bring home the gold! And Shane also bagged the unofficial awards of being “ultimate cheerleader” and “ultimate Olympics husband” on social media.

What an adorable pair. They say that Katinka – and anyone else for that matter – is sure to win if you have that awesome cheerleader screaming his heart out for you to go for the gold. Of course, as many have pointed out, anyone could scream that much and the athlete would not win if he/she is not the best – and that is true! Still, the internet could not help but admire this guy’s maniacal cheerleading skills. LOL.

Wikipedia defines cheerleading as an action that “ranges from yelling to intense physical activity for sports team motivation, audience entertainment or competition based upon organized routines.”