His mom, Kaye Angeles Naelgas-Castro, died while giving birth to his youngest sibling but 5-year-old Khayne Kheian Naelgas Castro could not understand that she’s gone forever. So, this young lad took a chair and stood on it so he could see and ‘hug’ his mother who was ‘sleeping’ inside the coffin.

Other family members could not help but cry as they watched the young boy trying his best to hug his mother, especially because this “certified mama’s boy” always wants to spend time with his mother and wouldn’t wish to sleep or eat if she was not around.

It was rather difficult for the family to explain to young Kheian that his mother is never going to wake up again and that he could never hug her again, no matter how much he wishes to do it. 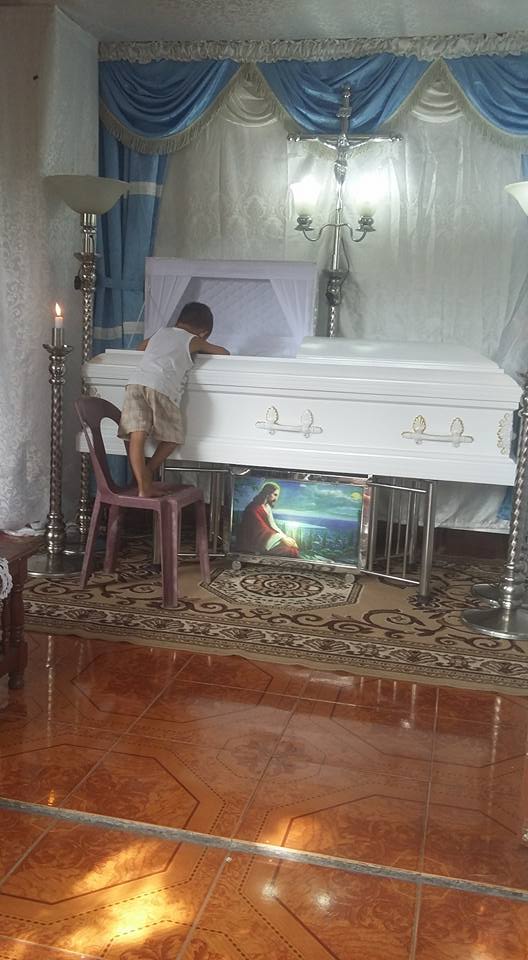 What’s even more heartbreaking for the family who hails from San Jose, Mindoro Occidental in the, Philippines, is that the boy’s youngest sibling is also fighting for his life.

According to family member Marichu Gabriel (who goes by the name of Chuchubelles Gabrielle on Facebook), Cyril Khayzer is also fighting for his life and had to be rushed to a bigger, better hospital outside their municipality after Kaye died. The child is still fighting for his life but the family is hoping and praying that there would be no second death in the family, especially because Kheian could not understand what was happening.

The Facebook post showing the young boy hugging his late mom’s coffin had gone viral on social media, with thousands of people hoping that the family will be alright, especially the little one still in the hospital.

Maternal Death in the Philippines

The rate of maternal death or death in childbirth in the Philippines is quite high, averaging about 162 deaths per 100,000 deliveries every year. The country is struggling to lower the numbers but the digits remain high despite changes in the medical care system (such as requiring all pregnant women to give birth in birthing centers and hospitals instead of simply hiring midwives to help deliver babies at home).