Around 2 months ago, rapper and record producer Kanye West made an unexpected declaration during his speech at the 2015 MTV Video Music Awards Ceremony. He said he plans to run for President of the United States of America in the 2020 presidential polls.

As it appears, it looks like he’ll have a contender from the music industry as well.

Singer and actress Lindsay Lohan has likewise announced that she plans to launch a presidential campaign for 2020. 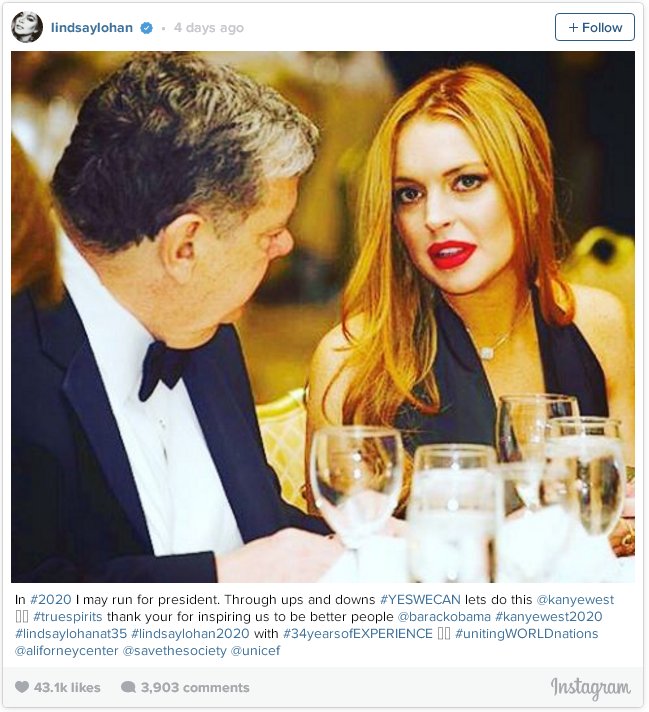 Lohan recently broke the news over at her Instagram account, expressing her intentions at joining politics 5 years from now – and running for the highest post in the country, at that.

Some netizens thought it was just a joke or something but Lohan’s subsequent Instagram posts confirmed she was serious about her planned presidential bid.

She even went as far as comparing herself to renowned leaders Mahatma Gandhi and Queen Elizabeth (as well as a nod to fellow presidential aspirant Kanye West).

People are, however, questioning if she will indeed be able to run considering her bad reputation. Not to mention that she’ll only turn 34 on 2020 and the minimum age requirement for a presidential candidate is 35.

Who Is Lindsay Lohan

Born Lindsay Dee Lohan in July 2, 1986, this American singer and actress has gained massive popularity during her career as a youth performer. She, however, became the center of numerous controversies as she went through a series of substance abuse and legal hassles.

She started her career as a fashion model when she was just 3 years old and later starred in a string of smash-hit movies such as The Parent Trap, Freaky Friday, Mean Girls, and Herbie: Fully Loaded.

As a recording artist, her best seller is her December 2004 album entitled Speak.