Cong. Leni Robredo was photographed while waiting for a bus at the Magallanes Shell Station.

The humble public servant narrated how she had just delivered her Freedom Speech for FNF at the McKinley Hill in Taguig.

Her friend Keisha del Castillo took her to the gasoline station so she can wait for the bus home. Keisha’s original post on Facebook was captioned:

The art of riding the bus to Naga: if you can’t catch it in Cubao, you can always try to flag it down at the Magallanes Shell Station. Like Cong. Leni Robredo.

The amused Leni shared the photo on her own page, creating her own caption:

Yes, that is definitely me. Taken by Keisha del Castillo at the Magallanes Shell Station as I was waiting for my bus last night. Keisha brought me there from McKinley Hill in Taguig after I delivered my Freedom Speech for FNF. Definitely my worst angle but can’t resist posting. Nakakatawa lang. Parang nag alsa -balutan at naglayas ang drama 🙂 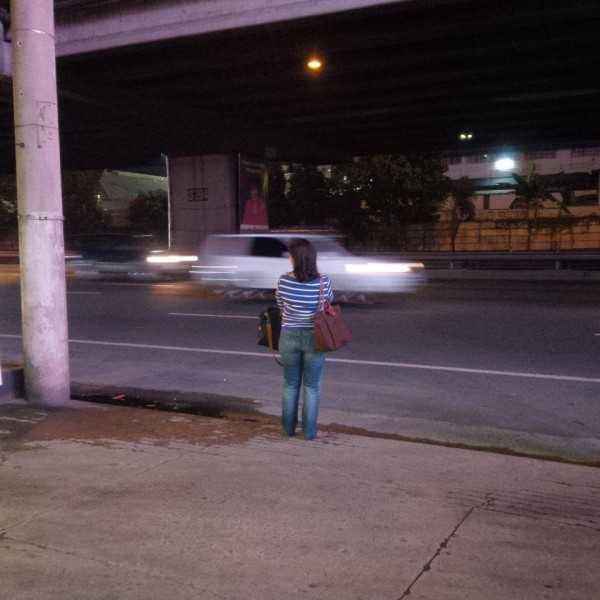 Everyone knows that the Robredos are humble, honest people but this is perhaps the first time that the late Sec. Jesse Robredo’s wife was photographed while waiting for public transport.

Judging from her confidence in waiting for the bus at that particular spot while carrying two large bags, this is not the first time she is taking public transport for home.

This makes Leni the perfect example for public servants, showing them how to truly take the public transport – not make a gimmick out of it so as to make it appear like they were taking public transport spontaneously but actually doing it as a PR event in reality!

For example, when Interior Secretary Mar Roxas tried to take the MRT last week and posted a photo on Facebook to show how humble he is for taking the public transport to escape traffic, the publicity stunt backfired after his team inadvertently posted a comment crediting “Team Mar” as the source of the photo which was supposed to be taken by a “netizen”.

Instead of getting praise for his humility, he was bashed across various social media for the staged ride.

On the other hand, Leni’s photo was welcomed warmly, with many netizens praising her for having her feet firmly planted on the ground and for not segregating herself from the common people.