The page also highlighted how ‘humble’ the interior secretary had been for riding the MRT instead of using police escorts and “wang-wang” (sirens) to push his way through traffic. It went on to describe that Roxas does not bully other motorists, so he chose to ride the MRT instead. This was supposed to be a show of humbleness and modesty.

To truly highlight his humbleness, there were no media people to record the big event or people from Team Mar to document the incident because he was just another commuter on the MRT, not some VIP. Oras Na, Roxas Na claimed, “A commuter took a picture of Sec. Mar Roxas.” 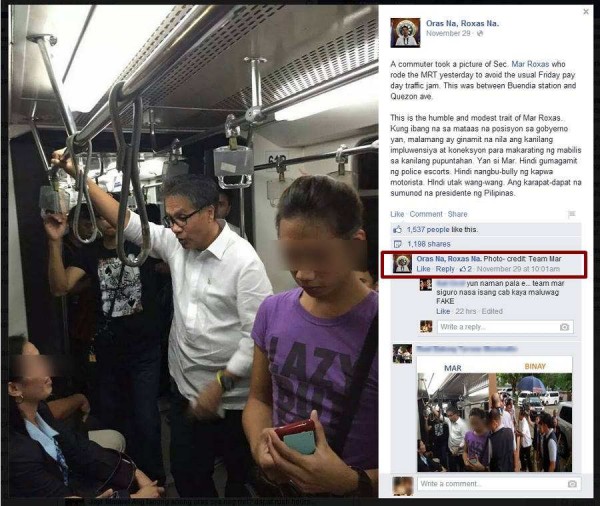 In the spirit of true journalism, Oras Na, Roxas Na then posted a photo credit in the comment section:

It was then that the netizens freaked out – was the ‘commuter’ who took the picture really part of Team Mar after all??? If that is that case, then the MRT ride was not really a spontaneous way of getting out of traffic but a staged ride so he could be seen riding public transport and supposedly show that he is the best man to be president.