For weeks now, social media has been abuzz over reports of the so-called “tanim bala” modus operandi at the Ninoy Aquino International Airport (NAIA) and various solutions have been put forward by netizens in hopes that these incredulous incidents would stop but the best one, so far, is from satirical site So, What’s News? Their “solution” is to wrap the NAIA personnel in plastic!

You might have already heard about the plastic wrapping stations at the NAIA which costs passengers P160 to wrap their bags – well, that’s not satire news. So, What’s News? takes a potshot at this money-making scheme by writing, “You don’t have to pay for anything to prevent something that is caused by our greed and incompetence in the first place.” The line was supposedly “said” by Manila International Airport Authority (MIAA) general manager José Angel Honrado.

The “best” solution to the problem was for all NAIA personnel to be wrapped in plastic from head to toe (with breathing and ventilation holes provided) at the start of each shift. Honrado’s supposed explanation for this “solution” goes, “This way you can be assured that their hands are severely restrained and would be incapable of planting a bullet in your precious bags.” 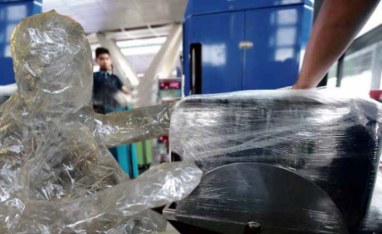 This is how a plastic-wrapped NAIA personnel is supposed to inspect passengers’ luggage
Photo credit: So, What’s News?

It is hilarious to think of the personnel wrapped in plastic, only capable of moving in small nudges and budges to inspect the bags. This “solution” also works in preventing possible extortion attempts because the personnel will find it hard to talk and negotiate their terms with the passengers.

What’s the Malacañang’s reaction on this solution? Positive. It seems the Palace hails MIAA’s moves and hopes the riding public will not feel afraid to pass through the NAIA now that the government has found a way to solve the tanim bala issue.

But will top officials need to wrap themselves in plastic, too? Here’s Department of Transportation and Communications (DOTC) secretary Emilio Abaya’s “answer”:

“We would also like to remind everyone that there is no need for me, MIAA general manager Honrado, or even the President to be wrapped in plastic. We are very much ‘plastic’ as it is.”

Kudos to So, What’s News? for creating such a hilarious piece of news. You guys made us laugh hard and wish equally hard that the “news” was for real – for this might really be the only plausible solution to stop the tanim bala incidents even if it is the most ridiculous of all…