A lot of people love dogs and get some as pets, whether through the pet shop or via adoption. But while many of these dogs are treated like family, a lot are also abandoned and just treated as animals. Indeed, dogs are animals but they do have feelings and are extremely loyal – and adopting one is actually akin to adopting a human child!

In a poignant film created by DeadLens Pictures, a man was shown as he picked up a young girl from what is assumed to be a foster home or orphanage. He takes her to the car and brings her to his home where she meets his wife and child.

The adopted girl and the man’s daughter bonded immediately. The man and his wife also loved the kid until she began to bother them as she seeks their attention. She would try to get them to play with her even when they were working, much like what a lot of kids actually do. But because she’s just an adopted kid, she would soon get on their nerves.

When her new parents continued to ignore her, the little kid became destructive and made a mess in the house. Left alone, she destroyed some of her new family’s things. For sure, she was just looking for attention but her new parents just couldn’t understand why she was doing that.

They continued to ignore her and would soon become too angry about her antics that the man became so angry he thought of getting rid of her. Instead of returning her to the orphanage, however, he took her to the woods!

To ensure she would get away from the car, he threw her beloved toy into the distance. She ran to pick it up and he quickly got back in the car and drove away. The girl first tried to follow him but soon realized what he was doing. 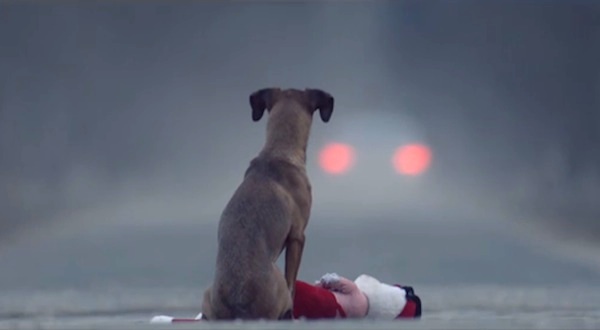 You’d surely be outraged at this point! But as the camera pans out, the girl becomes a dog. It turns out the man had actually adopted a dog but it was depicted as a little girl in the video to show that dogs are family, too, and have feelings like humans!