The 450-pound gorilla fatally shot during a rescue operation inside Cincinnati zoo didn’t appear to be attacking the 3-year-old boy who fell into its enclosure, according to a witness.

Harambe, a 17-year-old male Western lowland silverback gorilla, was shot dead by a zoo response team after it was seen dragging the child through the moat in its enclosure. However, Kim O’ Connor, a zoo visitor who shot the video, said that the gorilla was protecting the child prior to its shooting. 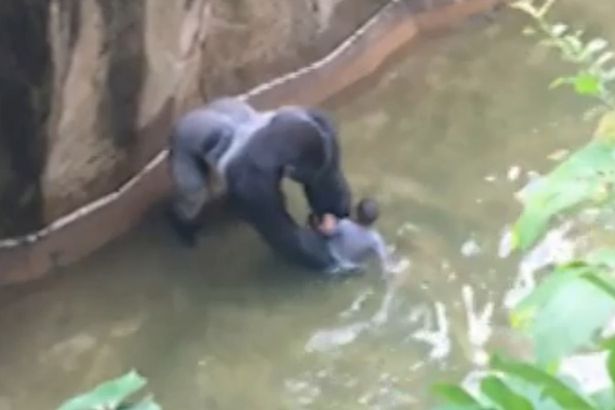 O’ Connor believes that the screaming of people scared the gorilla.

“I don’t know if the screaming did it or too many people hanging on the edge, if he thought we were coming in, but then he pulled the boy down away further from the big group,” O’ Connor told NBC.

According to PETA primatologist Julia Galluci, it is common for gorillas to act in a nurturing way toward humans.

“Gorillas have shown that they can be protective of smaller living beings and react the same way any human would to a child in danger,” she said.

Despite the zoo’s claims that they needed to put down the critically endangered gorilla since the boy’s was in a “life-threatening situation”, social media users lambasted them for their decision to kill Harambe. PETA also criticized the zoo for not having a second protective barrier around the habitat of the gorilla.

“They made a tough choice and they made the right choice because they saved that little boy’s life,”zoo director Thane Maynard explained. “It could have been very bad.”

Furthermore, Maynard added that they opted not to tranquilize Harambe since the drugs aren’t fast-acting and may not be effective for his size.

As of press time, Cincinnati Children’s Hospital, where the child was brought, has not released any information about the unnamed child.