MANILA, Philippines- In a surprising turn of events, Facebook has decided to suspend the account of Paul Quilet, the netizen who started an online petition to suspend the Facebook page of celebrity blogger and social media influencer Mocha Uson.

At around 10 pm on Monday, October 24, Quilet revealed through an update on his change.org petition that his Facebook account got reported hours after he created the petition to “Suspend Mocha Uson Blog Facebook Page”. As of this writing, his account remains unsearchable on Facebook. 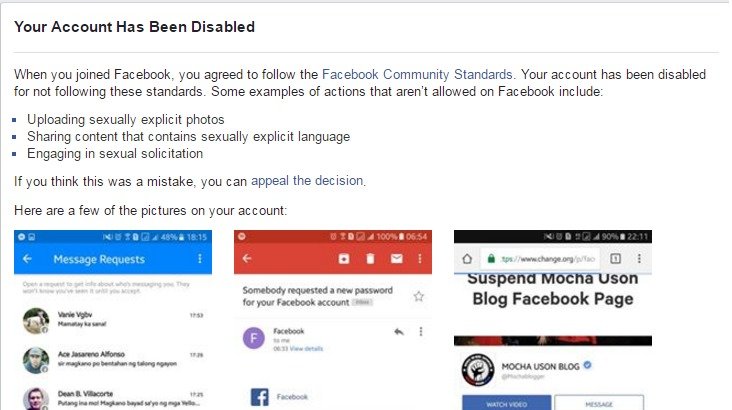 “Yes, my account was suspended. But at least not because I cultivated the culture of misinformation. I may have lost this battle but we will win this war on ignorance,” he wrote in one of the updates of the change.org petition.

In his petition, Quilet accused the staunch supporter of President Rodrigo Duterte of using her influential Facebook page to disseminate fake news, false information and unsupported claims about important issues in the country. He added that the page widens the gap between supporters of the firebrand leader as well as his critics.

The petition has gathered over 32,000 signatures as of press time.

In defense of Uson, a certain Cheryl Anne started a counter-petition titled “Stop online petition SILENCING MOCHA USON Blog”. Currently, the said petition has amassed more than 33,000 signatures since it was filed on Monday, October 24.

After earning criticisms from netizens including Senator Kiko Pangilinan, Quilet clarified through several updates in his petition that he does not want to downsize anyone’s right to free speech.

“Everyone is free to express what they want. But problems arise when this fundamental right is used to manipulate and condition the public, when it is exploited to serve anyone’s purpose, when it is used as a shield against accountability,” Quilet wrote.

Freedom of Speech in PH is Not Absolute

In the Philippines, freedom of speech and expression is not absolute based on Article 19 of the International Covenant on Civil and Political Rights.

According to the said law, freedom of expression entails restrictions such as respect for the rights and reputations of public order, national security, public health, public morals and others.