MANILA, Philippines- A petition to suspend the Facebook page of sexy entertainer-turned political blogger Mocha Uson  was filed on change.org by a certain Paul Quilet on Sunday, October 24. The petition, which needs 25,000 signatures, has been backed by more than 21,000 supporters as of this writing.

In Quilet’s petition, he alleged that Uson is using her Facebook page to disseminate lies and false information about pressing issues in the Philippines. He also claimed that Uson’s page has widened the division between supporters and critics of President Rodrigo Duterte. 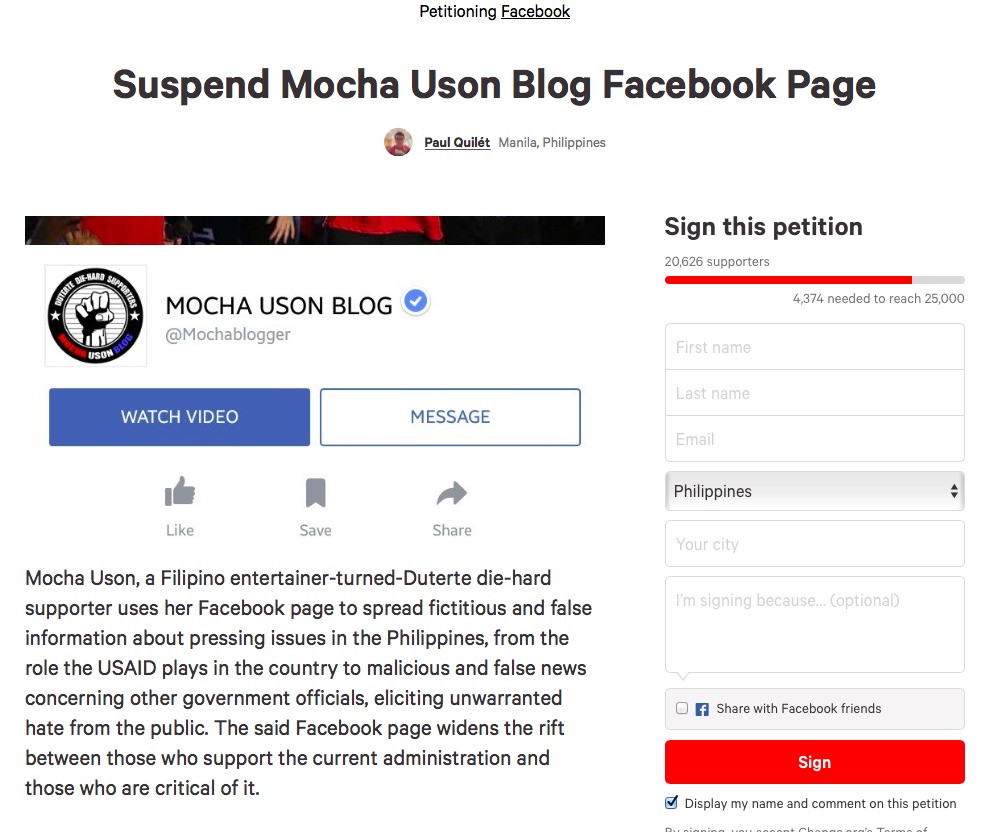 “Mocha Uson Blog, as of last check, has a vast fan base of approximately 4 million people. The Philippines needs your help to end this social media page which promotes lies and hate-mongering online. I have never seen someone divides our country so much since the time of Marcos. The only thing necessary for the triumph of evil is for good men to do nothing. Spread the word,” Quilet wrote in one of the petition’s updates.

Several supporters of the petition have shared their reasons as to why they signed it.

“I don’t think FACEBOOK needs another page that propagates nothing but lies and hatred towards those people who do not share the same views as hers. It is so insulting and disturbing to intelligent human beings who know the truth,” a certain M. Legara wrote.

A. Perez commented: “Freedom of speech does not only permit people to express their opinion but it also serves as a litmus test to screen what is cosidered the truth from fiction.

Meanwhile, Uson instructed her followers to follow the Mocha Girls page just in case her page gets suspended.

Mocha Uson, one of the most vocal supporters of President Duterte, is a singer, dancer, model and blogger. The daughter of a regional trial court judge and a pediatrician, Mocha has a bachelor’s degree in medical technology from the University of Santo Tomas (UST) . She also studied medicine at the UST Faculty of Medicine and Surgery but later dropped out to focus on her musical career.