Breaking her silence over the controversy surrounding the 56-year-old senator, Dulce said she has warned De Lima to come clean on her involvement in the illegal drug trade and refrain from speaking about it before things get worse. Dulce said she wants to feel sorry for the controversial female senator but believes that the truth most come out. 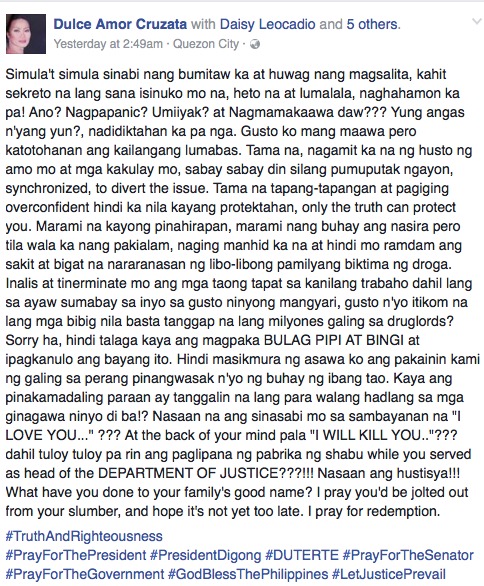 Based on her post, Dulce’s husband was among those allegedly fired by the former justice secretary because he refused to be involved in the illegal activity.

(You removed and terminated people who are honest in their work because they don’t want to be part of what you want to happen, you want to silence them as long as you receive millions from drug lords.)

(My husband can’t bear feeding us using the money that destroyed other people’s lives.)

Furthermore, Dulce claimed that De Lima was used by her former bosses in allowing the proliferation of shabu factories while serving as the secretary of the Department of Justice.

‘I pray you’d be jolted out from your slumber, and hope it’s not yet too late. I pray for redemption,” Dulce ended her post.

The post, which has spread like wildfire on social media, has since been take down after it was reported on Kicker Daily News and Pep.ph.