DSWD Secretary Dinky Soliman slammed the story by Mail Online which reported that hundreds of homeless children were picked up from the streets by officials and police to make the streets of Manila more presentable to the Pontiff.

“We do not tolerate this practice. We put child abusers in jail,” Soliman stressed.

According to Soliman, the photos used by the UK website were taken from previous stories involving Manila Reception Action Center (RAC), a temporary shelter run by the Manila Department of Social Welfare. The institution was alleged of denying basic rights such as food, clean water, clothing, and bedding to children.

Mail Online reported that the street children were kept, starved and abused  in “filthy” detention centres where older inmates are also staying. One photo even showed a 13-year-old girl chained to a pillar, screaming in pain and fear.

An earlier report by the Manila Standard revealed that the Pasay DSWD unit removed children from the streets to prevent syndicates from taking advantage of Pope Francis.

Rosalinda Orobia Pasay DSWD head said: “They know the Pope cares about poor kids, and they will take advantage of that.”

Orobia explained that they have been conducting rescue operations of homeless children since organised syndicates often abduct  and make them sell or beg on the streets. She added that the Department will provide shelter as well as skills and livelihood training for the children. 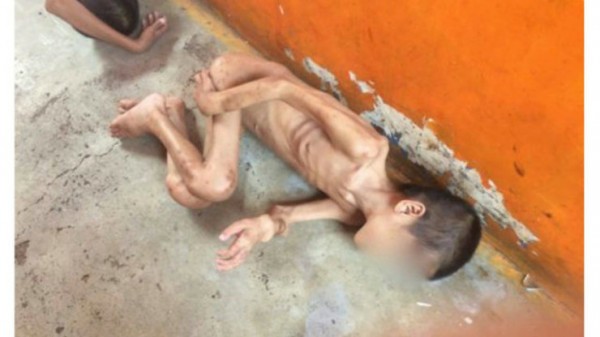 One of the photos showed a malnourished kid named “Frederico” lying on the floor of RAC. His controversial photo sparked outrage among netizens after non-government organisation Bahay Tuluyan circulated it online.

In its Facebook page, Bahay Tuluyan posted the photo and included a caption that read: “The conditions inside RAC are abysmal. Children are detained in this center without (charges) are treated worse than criminals. They are denied the most basic rights – adequate food, clean water, bedding and even clothing. Moreover, not only are children denied contact with their families but their families are often not even notified that they are being held inside RAC.”

RAC, a temporary shelter, is already in the process of being closed.

She said: “Frederico has already gained weight and is being cared for by an NGO with DSWD. We have found his mother and we are currently doing case work management with the mother.”