An injured guy spent $400 for the treatment of his limping dog, only to learn that the animal was just showing its support for him by also limping along as he walks! What an empathic creature…

Humans have long known that dogs are loyal animals who would stay by your side until the very end, especially if you love them and treat them right. But one dog recently went viral for going beyond what humans expect of these loyal creatures as it faked an injury to show support to his injured fur dad.

When Russell Jones from the United Kingdom injured his right leg in an accident, he grew concerned after seeing his dog, Billy, also limping around the house. When they were out for a walk, the dog appeared to be having a hard time walking as it continued to limp, raising its left front leg as if it was in pain. 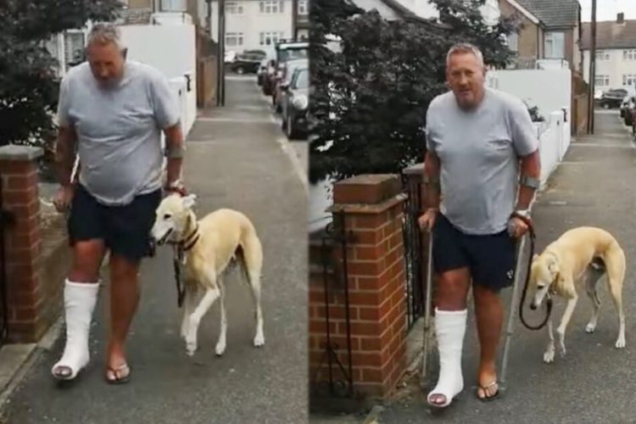 Russell’s wife was so worried that the dog might have injured itself without them knowing. So, Russel took the dog to the vet. He spent £300 ($410) for the x-rays and check-ups, only to be told that the dog was perfectly fine.

“Basically the next day [after breaking his ankle] as I was limping around the house, Michelle noticed that he was sort of copying me. That rose the concern that there might be something wrong with him, so we phoned the vet,” Russell explained.

“Because of social distancing, he walked in [to the vets] normally, and when he came out they said they couldn’t find anything wrong with him. Then again he started limping, so Michelle filmed it.”

After they went to the vet, the dog still continued to limp when Russell was around but the couple spotted him lurching around in the garden without a limp, playing by himself when he thought no one was watching. LOL. What a cutie!

While they can’t always express their emotions the same way that humans do, animals have long been believed to experience emotions, as what was written by Pythagoreans long ago. Animals are believed to have feelings similar to humans, including anger and jealousy.