A shocking footage of a woman being mauled by a Siberian tiger after she got out of her car in Beijing safari park has emerged online. The deadly attack took the life of a 57-year-old mother and seriously injured a 32-year-old woman.

Based on a surveillance footage, the younger woman surnamed Zhao got out of her car and walked around from driver’s side door while inside the tiger enclosure. The beast suddenly appeared behind Zhao and dragged her away. Seeing the danger she faced, her husband and mother rushed out to save her but to no avail. 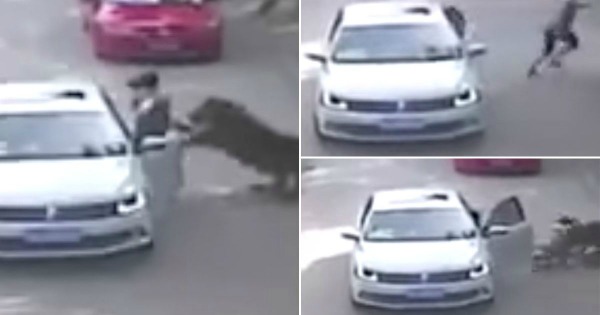 Investigators found that the family ignored safety rules and at the time that Zhao got out of the car, three Siberian tigers were roaming around the area. Staff inside a patrol vehicle reportedly saw what happened and warned Zhao to get back inside her car.

However, a full version of the footage that recently emerged revealed that the husband was running around desperately asking the help of park workers. The staff responded by simply blowing their horns and revving their engines hoping to scare the tigers away.

Twenty minutes after the attack, workers were seen lifting Zhao and her mother onto a rescue car.

Although Zhao admitted fault for the accident, she blamed the park for its inadequate response and asked for 2 million in compensation. The park only agreed to settle 1.2 million yuan in compensation for the dead victim but only offered 754,000 yuan for Zhao’s serious injuries.

According to reports, Zhao got out of the car to switch places with her husband and was unaware that they were still inside the tiger enclosure.

What is a Siberian Tiger?

Also known as Amur tiger, the Siberian tiger is either reddish -rusty or rusty-yellow in color and has narrow black transverse stripes. It has a body length of more than 150 cm and is typically 5 to 10 cm taller than the Bengal tiger.