We’ve seen so many people going viral on social media these days for various reasons – and it seems that talent scouts no longer have to physically go around the country to find people with talent because you’ll easily find them on social media!

Take for example a recent viral hit featuring a crazy beggar who surprised netizens after someone shared a video of him singing a Celine Dion hit and a Bryan Adams song at a town fair in Iloilo City, central Philippines.

According to netizen Pakz Abonado Formalidad, the ‘crazy beggar’ in the video had a golden voice – and watching the clip, it was easy to see that this man had surely been a performer in his former life, before he got crazy that is.

The first song choice was actually quite surprising as the beggar guy picked out Celine Dion’s “To Love You More”. Considering that the song was difficult to sing even by female singers, it was actually quite awesome that he seems to have nailed the hit song for most parts, anyway. 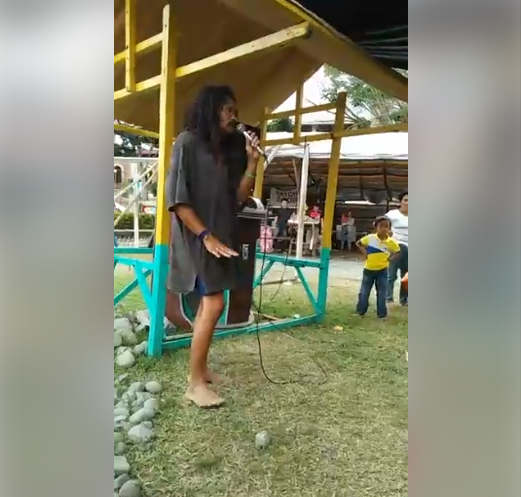 The second song was “Rescue Me” by Bryan Adams. He sang with feelings and could be seen tapping his fingers and hands along with the music which made us wonder what he had been before and how he became a homeless, crazy beggar.

Of course, he must have had a good life in the past since he memorized those songs; after all, you just can’t learn those songs and memorize the lyrics while living in the streets, right?

A huge crowd could be seen gathered around this beggar-singer – and we actually hope they gave him food and money for the entertainment he brought them.

But many netizens were quite skeptical whether it was actually this beggar-singer’s voice that could be heard on the sound system or whether he was lip synching as his voice on both songs was mostly awesome. What do you think?

Others also commented that he might just be pretending to be a beggar so he would go viral on social media. Hmmmmm.