Everyone knows that when you’re a dad, you would willingly do anything and everything to make your children happy. That’s a fact. While there are, of course, quite a number of crazy exceptions to this rule, most dads take this as an unwritten guide in dealing with their children.

But, in reality, how far are you really willing to go to make your child happy? Well, one dad has raised the bar – and it’s the sweetest thing you’ll see on the internet today.

Kiko Caravana is a tattoo artist in Manila. As a tattoo aficionado, he already has quite a number of tattoos on his body but while most of his inks were intricate patterns, his daughter would give him something extra special that he’d surely cherish for the rest of his life: an “I love you, Tay” tattoo (I love you, dad). 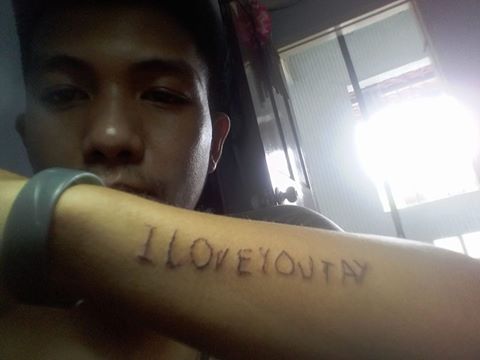 According to Caravana, his daughter made a deal with him: she would give him a tattoo and he would buy her a Jollibee meal. While his part of the deal did cost him some money, his daughter’s payment is certainly priceless.

As the daughter of a tattoo artist, the girl has certainly watched her father and his workmates create inks for other people. So, she knows how to handle the tattoo-making machine but Caravana admitted that because it was her first time to create a permanent tattoo, he felt much pain.

While such pain would go away after a few hours, the love the girl has put into that tattoo will last forever – not just on her father’s arm but also in his heart.

As its name sounds, a permanent tattoo is something that lasts for a long time on a person’s skin, quite possibly remaining on the skin even after death. However, even the permanent ink used in tattoo would eventually be broken down by the body; thus, tattoos fade over time.