With children spending several hours in school, it but natural that teachers become their second parents. And one teacher has proven that teachers can truly be a child’s second parent when a kid hides behind her back because she, the child, doesn’t want to go to her mother!

An angry parent called the cops on a teacher at the school for kidnapping – this after the child refuses to go with her but instead hid behind her teacher’s back. 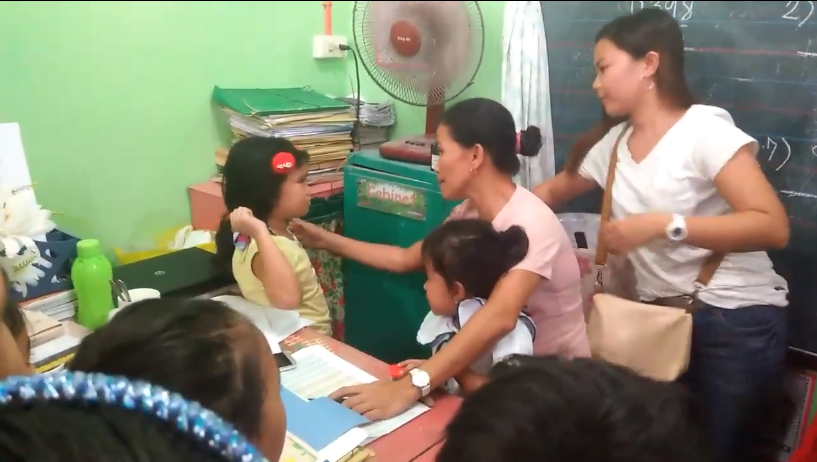 According to the post shared by netizen Kween Sae, the child’s father gave authorization for the kid to be transferred to this school but the mother got angry and wanted to get the child back, to presumably put her in her previous school and be closer with her mother; however, the kid appeared to be scared of her mother.

In the videos that Kween shared, the child looked so scared of her mother that she was crying and hugging her teacher tightly. The kid wouldn’t let go of her tight grip around her teacher’s waist, no matter how the mother tried to pry her hands.

Angered that the child wouldn’t go with her, the mother shouted at the teacher to go away so she can get the kid; when this didn’t work, she forcibly tried to break the child’s tight embrace around her teacher by pulling on the latter, still shouting for the teacher to move.

When this still didn’t work, she called the cops on the teacher and threatened to file kidnapping charges.

Kween angrily slammed this mother for her actions, revealing that she’s the niece of this kind teacher. According to Kween, it was her aunt who stood as second parent to the child and often gives the kid lunch because the mother was irresponsible but now the woman wants the teacher to be stripped of her license!

After seeing the video, netizens took the teacher’s side – after all, if the kid was scared of her mother, then it was but right that the teacher protected her against the woman!