MANILA, Philippines-The International Union for Conservation of Nature (IUCN) has listed whale shark or “butanding” as an endangered species in a report released early July. Winghead sharks were also listed as endangered, while Bornean orangutans were tagged as critically endangered.

This means that the gentle sea giant is now one step closer to extinction with the whale shark fisheries in souther China deemed as a definite problem. It was previously classified as vulnerable which indicates they had more than 30% decline overall. 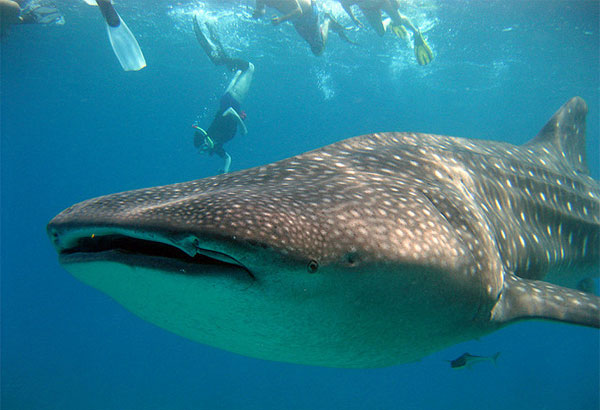 “We’ve just upgraded their listing to Endangered, which means the population has probably halved over the last few years,” Simon Pierce of Marine Megafauna Foundation and IUCN Shark Specialist Group.

According to Pierce, the regional population of the whale shark species is affected because the migratory species swim into southern China, an area where several active whale fisheries occur. They have also noted that whale sharks have been moving between Philippine islands.

The IUCN said the numbers of whale shark have declined to more than half in the last 75 years due to growing human pressures. These creatures also get killed by ship propellers.

“The world’s oceans and forests will only continue to provide us with food and other benefits if we preserve their capacity to do so.”

In the Philippines, tourists in Donsol in Sorsogon and Oslob in Ceby are allowed to experience swimming with whale sharks. Despite boosting ecotourism in the country, whale shark interactions can be harmful for the species as it will prevent them from doing their natural behaviour.

What are whale sharks?

Known as the largest fish in the sea, whale sharks are slow-moving filter feeders that can reach lengths of 40 feet. It is found in open waters in tropical oceans and has a lifespan of about 70 years. Despite their large size, whale sharks are completely harmless to humans.