Home
News
News & Culture
Boy Uses Hand as Pillow for Mom, Right after Giving Up Seat for Lady with Baby

Is chivalry dead? More often than not, men these days no longer give up their seats for ladies, no longer open doors for them, and no longer do things that chivalrous men from the past did out of habit.

But we shouldn’t generalize and say that all men are no longer chivalrous because there still exist many who actually are! Take for example this young lad from China who has gone viral for his thoughtful acts, even when he’s still a kid.

According to eyewitnesses, the unnamed kid was sitting beside his obviously tired mom when another lady entered the train, pushing a stroller with a baby inside. Seeing that this lady was having rather difficult time with her baby, the boy quickly stood up and offered her his seat!

Isn’t that sweet of this boy to do? But that was not the only admirable thing he did on that train. 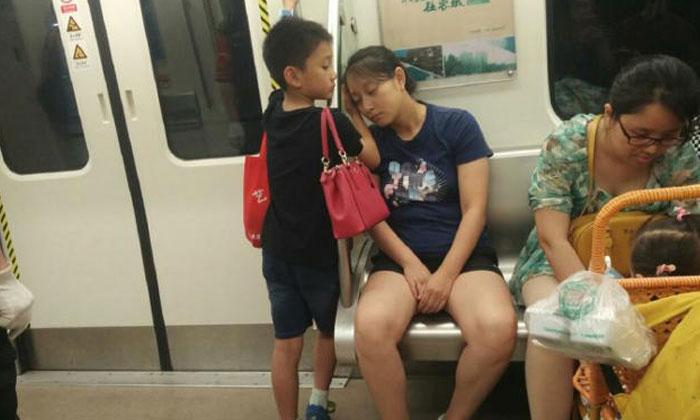 After his tired mom fell asleep, he took her bags and carried these himself. Then, he gently put his hand in between her head and the railing to create a makeshift pillow! Truly, this young boy is a thoughtful and chivalrous little hero.

His name is unknown – and we’ll probably never know who taught him how to be this kind but he must have seen his elders do this. After all, kids often imitate what adults do.

Another commuter who saw the sweet moments unfold before his eyes, took to social media to share photos of this young lad. The post quickly went viral, with several netizens praising the young boy for what he did as this is certainly a rare treat in today’s so-called “Generation Me” or young people who only think of themselves.

Others joked that they want to find the kind so they can ask his parents for an arranged marriage with him and their kids. LOL.