Yesterday, we shared with you that news about an incident in the Bonifacio Global City intersection involving a blue Toyota innova hitting a motorcycle. The offending driver immediately fled from the scene, escaping the possible consequences.

The report sparked a lot of anger from online netizens and the vehicle was eventually identified having the plate number ACA-9310.

Fortunately, the Innova owner got in touch with TopGear.com.ph to explain her side. The website wrote:

“The Innova belongs to lawyer Haydee Chavez and her husband. The vehicle was driven by their family driver, 53-year-old Edgardo Hurna, at the time of the incident. According to Chavez, the driver did inform them that he had been involved in an incident with a motorcycle–he had to, because the Innova had sustained visible scratches on its bumper–but that they didn’t realize the severity of the situation until they saw the video.”

“After seeing the video, we immediately went to the police station with the vehicle and our driver to report the incident,” Chavez shared. “We are willing to face the consequences of what happened, and settle with the motorcycle rider.”

Chavez described Hurna as a “seasoned driver” and that he may have simply panicked because this was his first accident. She also hopes that the public would stop expressing their hatred because of the incident. “That vehicle is used to transport our kids to school. As a mother, I am naturally worried that others might harm the car,” she said. 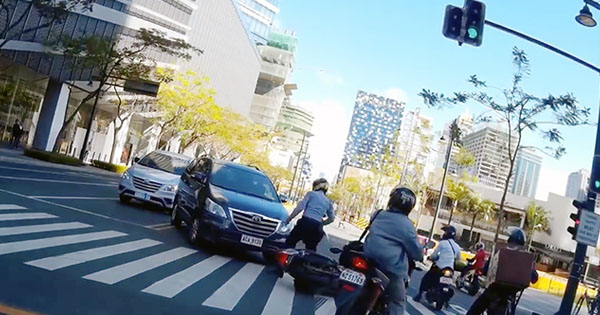 Meanwhile, the motorcycle rider was identified as Vijay Nagale, an expatriate from India who works as a director for Alcatel-Lucent. He clarified that the Innova actually didn’t hit him. “I wasn’t hit by the Innova, because the moment I saw that it was about to hit me, I let go of my bike, which slid and hit the front part of the vehicle,” said Nagale.

Despite that, Nagala suffered injuries when he fell to the ground such as several abrasions plus a swollen knee and ankle which makes it difficult for him to walk as of the moment.

“I ride a Kymco scooter to my office in Makati because I do not want to deal with traffic in a car… All I wanted was for the driver to get out of the vehicle and help me lift my motorcycle, as I had a hard time doing so because of the injury. I wasn’t really looking to file a formal complaint or whatever. I’m a foreigner here, and I don’t really want any trouble.”

As of this writing, TopGear has already forwarded the contact information of Chavez to Nagale. The website mentioned that “both expressed willingness to talk and settle things amicably.”